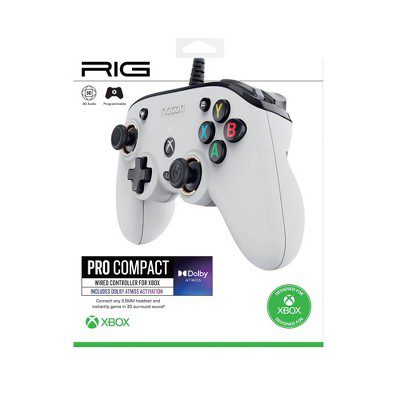 Nacon’s Rig Pro Compact offers a lot of features that go well beyond it’s price point, making it a great option for Xbox and PC players.

I don’t do much gaming on my PC at home and never have. Aside from RTS/strategy games, I tend to stick to my consoles. There are a variety of reasons (my computer rarely keeps up with the latest technology and updates), but a major factor has always been how much I struggle with keyboard gaming controls.

I know, it seems like an odd complaint for a person who spends a ridiculous amount of time each day utilizing one. Yet, keyboard gaming has always felt awkward with the action/adventure games I tend to favor. I’ve used other PC based controllers in the past (8BitDo) for retrogames I have, but those never felt right for anything more recent.

With the expansion of Xbox Game Pass and the XCloud, despite not owning an Xbox (yet), I’m able to enjoy a bunch more games on my PC. I’m able to fill in some gaps from my gaming backlog and have found myself in need of a far better controller than I’ve had in the past.

Nacon was kind enough to send me their new Rig Pro Compact controller which, despite being more on the budget end of gaming controllers, brings a host of impressive features. Yes, it does work with your Xbox Series X|S consoles as well, but for my review I used it on my PC.

From the outset, I loved how the controller felt in my hands. The textured, hard-shell plastic is both comfortable and ensures a solid grip. It doesn’t feel flimsy or cheap and comes with a wired chord that’s feels meaty, braided for durability, and super long so you can sit pretty much anywhere you want.

There’s a satisfying clickiness to all the buttons, giving you just enough feedback on your inputs without being over the top. While the joysticks feel a bit “slippery” I didn’t notice any issues when I was actually playing.

As the name implies, The Rig more compact and isn’t shaped in the same way as other Xbox controllers. In fact, it looks and feels more akin to a DualShock controller than anything from Microsoft. As such, if you’re picking this up after playing with a more traditional Xbox setup, it might take a bit of adjusting. As a primarily PlayStation gamer, however, I picked it up without issue and felt right at home.

All in all, as a plug-in-play controller The Rig already stands out and works effectively. I used it on a number of games including my hands-on preview time with King’s Bounty II, some classic shooters (DOOM 64), and plenty more just to see how it played. Jumping into any of the games was as simple as plugging the Rig and getting to work. I loved how easy it was, without the need of going into settings and having to completely set everything.

As someone who primarily games with a controller I enjoyed the ease of use and being able to dive into some of the games I haven’t been able to get around to yet. For $50 it’s a pretty great deal for a solid controller that feels great and plays excellently….But that’s really on scratching the surface of what the Rig Pro Compact can do.

In addition to work as a normal Xbox controller (with all the same buttons in all the right places), there’s also the option to customize your controller in a number of ways. Via Nacon’s free software called Pro Compact, you can remap all of the face buttons/D-pad. You can adjust the sensitivity levels on the shoulder/bumpers as well as the joysticks, even going so far as to alter the deadzones so you can give yourself a bit of play in your joysticks.

There’s a lot of nuance you can build into your Rig controller thanks to these settings, something you can normally only get with the Xbox Elite controller, which costs TRIPLE the amount of the Rig. Even better, the software works for both the PC and your Xbox console. Too often, customization only works on PC while everything else is relegated to a standard setup.

The software itself is easy to use and navigate, though I would caution you to limit your interactions with it if you’re actually in the middle of the game. While it’s built to be able to adjust your controllers in the middle of a game, I noticed some bugginess when trying to do so. Nothing major or deal-breaking, but it’s probably best to get your adjustments handled at the start of your game to avoid any unpleasantness.

Personally speaking, I don’t do much in terms of customizing my controller, but having the option to adjust it, game-to-game and on the fly, is pretty damn neat. For example, while playing DOOM, I noticed the joystick was a bit “sensitive” and even the barest brush against it sent my POV all over the place. I was able to tone it down with the help of the deadzone adjustment, which I then reset once I jumped back into a different game.

By and large, however, I mostly stuck to the defaults because I’m a simple man/gamer. For gamers more serious about their playtime, or even working on doing things professionally, the amount of fine-tuning you can make to the controller will certainly be a huge deal and worth way more than the simple $50 the controller comes in at.

And all that’s not to mention the fact it comes with Dolby Atmos for headphones. In fact, it’s the very first controller to do so with Nacon providing an activation code. So you can use any set of headphones with the 3.5mm jack and take advantage of the Dolby surround sound experience while gaming. Considering that’s normally an extra cost, that’s quite a lot of extra bang for your buck included.

The Rig Pro Compact is a really great controller. Even if you’re using it as a bare-bones controller for your PC or Xbox, it feels great in the hand, is super responsive, and feels like a controller that’s built to last.

It’s value goes well beyond that, however, packing in features that you can normally only gte in a controller that’s significantly more expensive. Nacon brought the goods to this controller and offers something for gamers of all levels to enjoy for a budget price that’s really hard to beat. If you’re looking for an extra controller, or to simply upgrade your current setup, it’s hard to go wrong with this one.

The Rig Pro Compact is available now online and most major retailers.