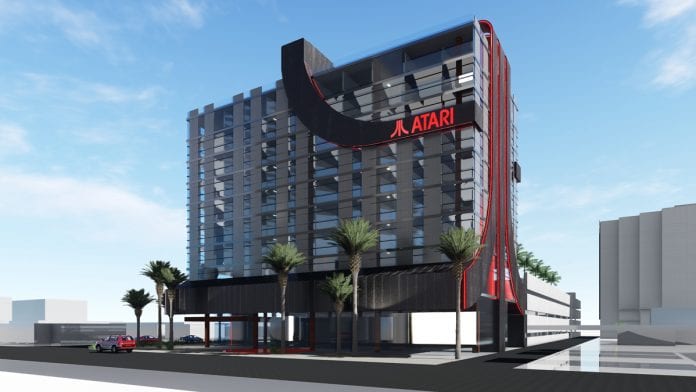 Atari announced yesterday that video game themed hotels are in our future thanks to a partnership between the iconic game company and GSD Group.

“Atari Hotels level up hotel entertainment with fully immersive experiences for every age and gaming ability, including the latest in Virtual and Augmented Reality. Select hotels will also feature state-of-the-art venues and studios to accommodate esports events,” the official Atari Hotel website says.

The first hotel will break ground this Spring in Phoenix, AZ. The website states that locations in Austin, Chicago, Denver, Las Vegas, San Francisco, San Jose, and Seattle will begin soon after.

“One of the most distinctive trends in gaming is gamers gravitating toward recognizable intellectual property,” a press release on the announcement stated. “Atari Hotels will offer consumers exactly that, marrying the origins of gaming and the future of the booming industry into a fun and unique travel destination.”

“We are thrilled to partner with GSD Group and True North Studio to build the first-ever Atari branded hotels across the United States. Together we’ll build a space that will be much more than just a place to stay,” said Fred Chesnais, CEO of Atari, in a press release. “Atari is an iconic global brand that resonates with people of all ages, countries, cultures and ethnic backgrounds and we cannot wait for our fans and their families to enjoy this new hotel concept.”