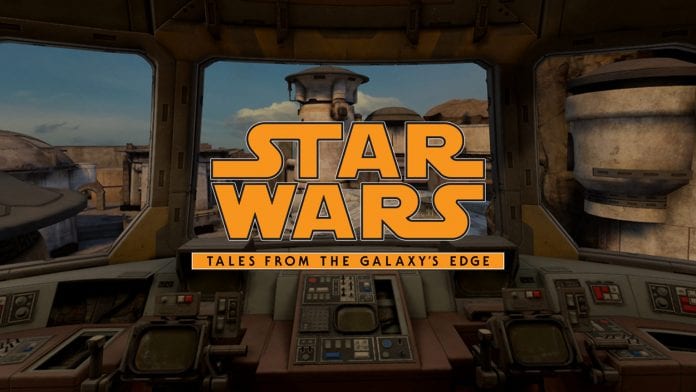 ILMxLAB has announced their Star Wars VR game, Tales From the Galaxy’s Edge is getting a Part II later this year and brings a familiar face.

Dok-Ondar, the proprietor of rare antiquities in the galaxy far, far away is a familiar face for fans who’ve visited Galaxy’s Edge. Everyone will soon get the chance to meet/interact with him thanks to a Tales From the Galaxy’s Edge follow-up. The previous VR game launched last year, and ILMxLAB has announced fans will return later this year and offered a first look at Dok-Ondar’s appearance in the game:

“Dok-Ondar and his famous antiquities shop rests at the heart of Star Wars: Galaxy’s Edge. At ILMxLAB we are having a blast exploring more of his story and building on the lore for one of Black Spire Outpost’s most memorable characters,” said Jose Perez III, Director. “Being next to Dok-Ondar in virtual reality for the first time is truly a magical moment and we can’t wait for fans to experience it.”

An infamous collector who buys, sells, and trades rare and valuable relics in his Den of Antiquities in Black Spire Outpost, Dok-Ondar is known as the gatekeeper of the black market, as he has amassed an impressive collection of unique artifacts that is unrivaled in the galaxy.

“Dok-Ondar is as legendary as the antiquities he has collected from across the galaxy. From the first time we heard about him in Solo: A Star Wars Story, we knew that there was something mysterious about this infamous Ithorian,” said Scott Trowbridge, Walt Disney Imagineering Portfolio Creative Executive. And although we’ve been able to learn more about him in the comics or even visit him in person at Star Wars: Galaxy’s Edge, I’m thrilled that fans can now further connect and step even deeper inside his hidden past in Part II of Star Wars: Tales from the Galaxy’s Edge.”

With Star Wars: Tales from the Galaxy’s Edge, fans play a droid repair technician who crash lands on Batuu after a pirate attack. In typical Star Wars fashion, they’ll get swept up in a grand adventure on the outskirts of Black Spire Outpost, proving that anyone can become a hero. As follow up to Part I, which launched in 2020 to critical acclaim, Part II will launch later this year on the Oculus Quest platform. Extending the core adventure, fans will be able to explore even more beyond the outskirts of Black Spire Outpost, and visit other places and eras in the Star Wars galaxy through two more legendary Tales.

We’ll have more updates on Part II of Star Wars: Tales from the Galaxy’s Edge as they drop, but the game is set to hit Oculus later this year.