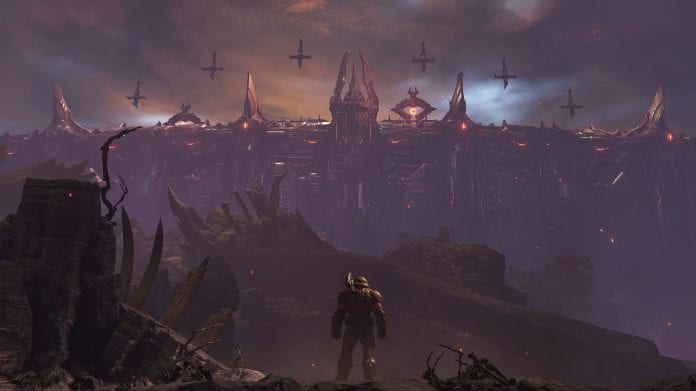 The time has finally come for The DOOM Slayer to end the war between good and evil, once and for all. The Ancient Gods DLC is the second DLC for the critically acclaimed  DOOM ETERNAL, which in my books is “The Best Doom in the series!”.

This DLC is looking better and better each time I have watched the trailer, it seems like the Dark lord looks a bit scared of The Slayer, hell I would be scared too if a half-mortal man took down almost the entire army of hell in just a short amount of time.

The trailer is also packed with all kinds of teasers for the game. Earth seems to be overgrown with plant life (making me think it’s been years since the last DLC), also not only do you have your army at your side. . .but you get to ride a fucking dragon in the game! I thought the DOOM Slayer was already badass enough, but now he has a dragon at his disposal!

We were also surprised to find out the DLC launches tomorrow (March 18th) for PC, Xbox One, PlayStation 4, and Stadia. Make sure to check back here soon for my review of the DLC and GamePlay!

You denied the gods and awoke an ancient evil. Now rally the scattered Sentinel armies, lay siege to the last bastion of Hell, break through the fortress walls, and face the Dark Lord himself. The soul of the universe hangs in the balance.

Face Hell’s armies in never-before-seen locations. From the ruins of ancient Sentinel settlements and the cosmic wonders of the World Spear, to a devastated and overgrown city on Earth hiding a mysterious gateway, to the last bastion of the Dark Lord protected by towering walls and powered by advanced technology.

Prepare to fight deadly new variations of demons, including the powerful new Armored Baron, the stalwart Stone Imp, the venomous Cursed Prowler, and the new Screecher zombie who empowers nearby demons when killed.