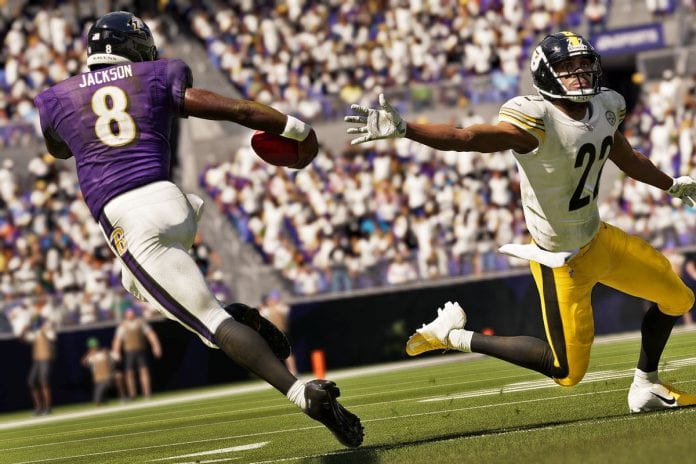 When Madden NFL 21 hits stores on August 28, there will be a new mode added to the game. It’s called The Yard and it’s being marketed as, “a fun, dynamic mode for players to experience backyard football with fast-paced, small-sided gameplay.”. The Yard is really all about creativity and individuality.

“House rules are the name of the game and creativity after the snap is where The Yard’s all-new gameplay takes full effect. New animations lead to momentum-shifting moments, where players can run up the score with extended play combinations. In the Gillette Style Zone, players will be able to customize their avatar, including facial hair, hairstyle and more, to express their individuality. Visiting the Gear Store allows players to outfit their avatar in fresh looks, with exclusive new gear drops planned all season long. Players will also develop their own playstyle as they rack up wins in The Yard, all while earning experience points, rewards and competing in new field locations with unique vibes and varied rule sets.”

Players will get to create their own custom avatar, customize it with eclectic gear, and then proceed to pull off game changing trick plays, such as behind the back throws and double passes; and execute wild gameplay moments to win in new field locations around the globe in 6v6 competition. The Yard will also be accessible to play solo, online co-op vs. the CPU or online head-to-head multiplayer in teams of one, two, or three players.

Before Madden NFL 21 releases, EA Sports is allowing players to play its companion on starting today. By downloading the Madden NFL 21 app, players will be granted access to “The Yard: Underground“. In this mobile version of the game, players can earn rewards by solo playing 5v5 games and begin customizing their avatar.

“We wanted to create a new way for players to express themselves and take on small-sided football in an arcade-style experience that’s completely new to Madden,” said Seann Graddy, Executive Producer of Madden NFL 21. “The Yard is fast, thrilling and most importantly fun. Players will delve into all new gameplay on mobile and on consoles that will bring to life the backyard football that NFL players and fans grew up loving, where the rules are relaxed, and you can win with attitude.” While The Yard seems like an interesting new mode for players to enjoy, I can’t help but shake this idea that it’s just a way for EA to undercut the untitled 2K Non-Simulation football game. Since making a partnership with the NFL, 2K has been working on a Non-Simulation NFL game by 2021. Maybe it isn’t backyard football, per se, but it likely was/is on the table for the studio. Perhaps, EA Sports was planning to add this long before that deal was made, too. Either way, the whole thing just seems a little suspect.

Furthermore, fans have been pleading with EA Sports to improve franchise mode for Madden NFL 21. They weren’t asking for a backyard, creative, insert PR speak here new mode. They want features for franchise mode that will see it return to its former glory. Yet, now we get 6v6 colorful backyard football.

Madden NFL 21 releases on August 28, 2020 on PlayStation 4, Xbox One, and PC. It’ll be part of the Dual Entitlement program to upgrade free to PlayStation 5 and Xbox Series X.