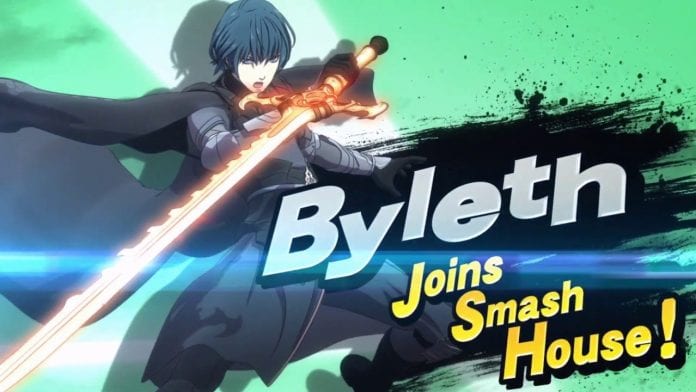 A few days before Super Smash Bros. Ultimate Director Masahiro Sakurai revealed their latest fighter, Nintendo dropped a pretty glaring hint in an image promoting today’s reveal. Hindsight being what it is, we now know that the three ??? were meant to represent the Three Houses of the latest Fire Emblem game. Yet, that didn’t stop Smash fans from speculating about other characters.

Ever the self-aware, Mr. Sakurai teased fans by saying that he had to keep it under wraps from Nintendo executives, as they would’ve been shocked, before asking fans to not be disappointed it wasn’t the character they thought it would be. Then, he introduced the newest member to be Byleth of Fire Emblem: Three Houses.

While the reveal may disappoint the fans with loftier expectations (Master Chief/Dante), Byleth is a solid add and one that fits within the Super Smash Bros. Ultimate universe. Mainly because there are already 7 other Fire Emblem characters on the roster. Nevertheless, both male and female Byleth have accepted the invitation to join Smash and are bringing several divine items to the battlefield.  For starters, players will be able to use the sword-whip hybrid The Sword of the Creator, as their default weapon. Then, depending on the attack direction will produce the spear Areadbhar, the axe Amyr, and the bow Failnaught. Mr. Sakurai explained that Byleth‘s mobility is a tad better than Robin’s but still isn’t all that good. The trade-off, though, is that Byleth has a lot of makings of a bona fide tank. The Sword of the Creator has ridiculous range, the point of Areadbhar is as strong as Marth’s sword, Amyr has a downward meteor strike that’s similar to Falcon Punch, and Byleth’s Bow (Failnaught) is more powerful than Link’s. Charging it will create a beam of light that’s even more powerful.

To some, maybe Byleth wasn’t the most inspired choice, but the reality is, Fire Emblem: Three Houses was one of the best-selling, critically-acclaimed games of 2019 for the Nintendo Switch. So, it makes all the sense in the world that they’d want to utilize their main character for Super Smash Bros. Ultimate. Regardless of your personal feelings on that matter, you can’t deny that they made a pretty impressive character with them.

Byleth is the final member of the Super Smash Bros. Ultimate Fighters Pass and will become available on January 28, 2020 for $5.99 on the Nintendo eShop. Owners of the Fighters Pass will automatically receive Byleth at no extra charge.

If you’re bummed your character wasn’t selected for Smash, don’t worry. Mr. Sakurai stated that more characters are on the way and will be revealed at later date.