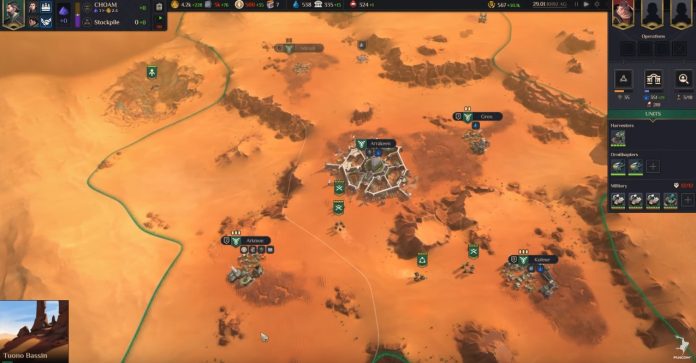 This morning brings our first look at actual gameplay for the upcoming Dune strategy game, Spice Wars and it looks like exactly the Dune game we’ve been wanting.

It’s no secret that since its announcement at The Game Awards, I’ve been very eager for more details on Dune: Spice Wars. I grew up with the original RTS Dune games (which pretty much created the genre as we know it), and have long pined for a return to those games for the franchise. With Dune: Spice Wars, that’s finally happening and this morning brings us some gameplay footage to enjoy:

While there isn’t a LOT to go on here, I’m digging everything we’re seeing so far. With the RTS elements and larger 4X strategy stuff in play as well, I can already feel the hours I’ll be losing to it.

A real-time strategy game for PC with 4X elements, from the developers of the critically acclaimed game Northgard. Set in Frank Herbert’s groundbreaking Dune universe, you must lead your faction and battle for control and dominance over the harsh desert planet of Arrakis.

Frank Herbert’s Dune
Experience the unique Dune universe – one of the most influential sci-fi settings ever created. Play as iconic characters, such as Duke Leto Atreides, the Baron Vladimir Harkonnen and more, and guide your faction to victory. Watch for the constant threat of the massive sandworms, who dominate the dangerous landscape of Dune.

Forge your own path
Choose between subterfuge, political influence, economic supremacy, or open warfare to prevail and gain control over the most important planet in the universe! Use secretive agents to sabotage the plans of your opponents. Vote on political resolutions in the Landsraad to further your strategy.

4X in real-time
Explore Dune with ornithopters to discover resources, villages, and points of interest. Expand with your troops to take control of more and more regions. Exploit the resources through buildings and spice harvesters to dominate the economy. Exterminate your enemies with a strong military but beware as outright aggression can have high political repercussions.

Dune: Spice Wars is set to launch this year on PCs.