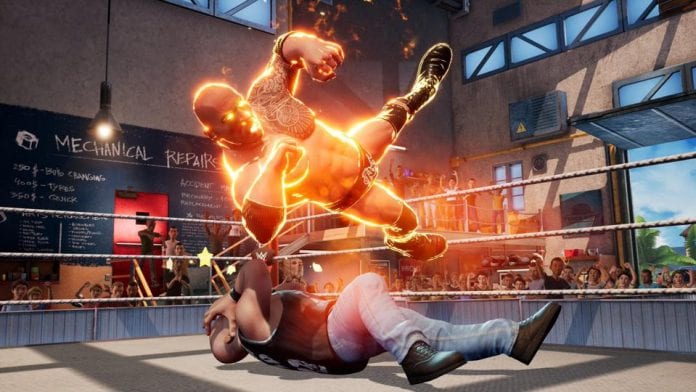 2K Games has just released a new trailer for WWE 2K Battlegrounds featuring arguably the greatest manager, hype man, promoter in all of sports entertainment Paul Heyman. In it, Heyman explains what we can expect when WWE 2K Battlegrounds releases next month, including matches and the campaign mode.

Campaign Mode: Throw down in this single-player story mode told through a comic art style as you add to your stable of WWE Superstars to overcome the next challenge. Team up with Paul Heyman and Stone Cold Steve Austin as you travel the globe in search of new Superstars for an all-new WWE brand. Play as one of the seven newly created Superstars, such as Bolo Reynolds and Jessica Johnson, as you travel across several regions battling WWE Superstars, achieving campaign goals and unlocking various WWE Superstars, power-ups and items;

Exhibition Mode: Brawl with your friends or family, with up to four-player action online or on the couch in your favorite match types, including:

King of The Battleground Mode: Battle to become the Last Man (or Woman) Standing as you and up to seven other online players burn it down and try to toss one another out of the ring! The longer you stay in the arena, the higher your score climbs. The second you send someone flying, another Superstar waiting outside the ring enters the fray;

Online Tournament Mode: Take the action online for rewards in a variety of time-limited tournaments featuring a wide range of win conditions. Keep an eye out… you never know when a new Battlegrounds tournament might be kicking off;

Battleground Challenge Mode: Brawl from the bottom all the way to the top! Create your own WWE Superstar and overcome all the odds stacked against you.