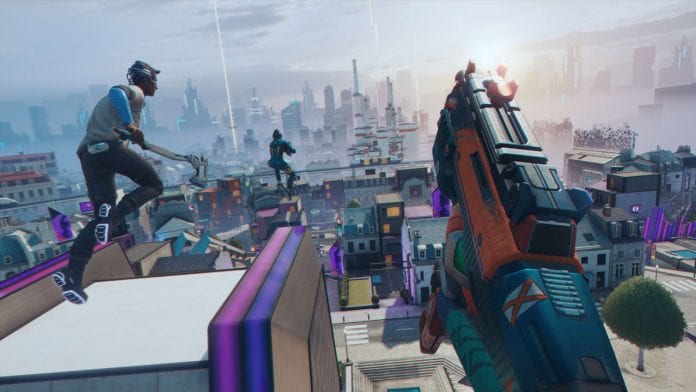 Last month, Ubisoft officially announced their First-Person Shooter Battle Royale game, Hyper Scape. Its reveal showed players of eclectic style battling each other within a futuristic, urban landscape. Defeating each other with a variety of unique weaponry, it was a race to the finish for a golden crown.

That reveal trailer made Hyper Scape look really fascinating. However, today’s cinematic trailer pulls back the curtain on what Hyper Scape is really all about.

Today at Ubisoft Forward, Ubisoft announced a Hyper Scape Open Beta for all PC Players available immediately worldwide. Hyper Scape is a free-to-play fast-paced urban battle royale first person shooter. Developed by Ubisoft Montreal, Hyper Scape takes place in the distant future of 2054, where up to 100 Contenders descend upon the virtual city of Neo-Arcadia to engage in action-packed and fast-paced matches to be crowned champion.

The story behind Hyper Scape is very reminiscent of Ready Player One. Its set in a distant, dismal future where everyone’s only escape is through a VR world. If successful in Crown Rush, the player gets riches beyond their wildest dreams. However, as the trailer shows, there is a catch. A dark secret hangs over Neo-Arcadia and I’m sure we’ll uncover it in time.

A PC Open Beta for Hyper Scape is online now. Alongside the Open Beta, North America Ubisoft will host a Creators Cup over the next three Fridays from 2:00 pm ET / 11:00 am PT to 4:00 pm ET/ 1:00 pm PT, featuring some of the top Hyper Scape creators competing for a total prize pool of $50,000. To tune in go to https://www.twitch.tv/hyperscapegame