Today we got even bigger hints as to what it may be. First the words “Heros Return,” have been added to the bottom. So we take it this is some sort of mash up, possibly, and of course some heros we already saw are making a comeback. What could it be?

Well the bigger hint is who posted it, Insomniac Games! They currently don’t have an exclusive title announced for PS3 or PS4, so this would be a good suggestion that they are making something great, as they opened the second half of their studio to keep doing more than one game.

The first thing that came to mind for me was that they are making a proper Ratchet and Clank title for PS4, but then suggestions started flooding in. The picture looks very similar to the portal from Jak and Daxter, plus you have some outer space looking effects around it. Perhaps the title is the return of both teams in one proper mash up, since their latest team up was rather bland. Or perhaps Insomniac simply took on Jak and Daxter since Naughty Dog is a bit busy with other titles? The HD collection seemed to have some popularity to it after all.

Their could be other options here too that people got rather excited about. While the image is a bit “cartoony” it could still lead to Resistance somehow, and that game on PS4 would be a dream. Perhaps Sony also has found a way to purchase back Spyro? Okay, now we are dreaming. 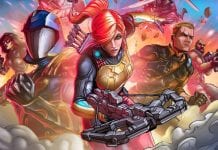