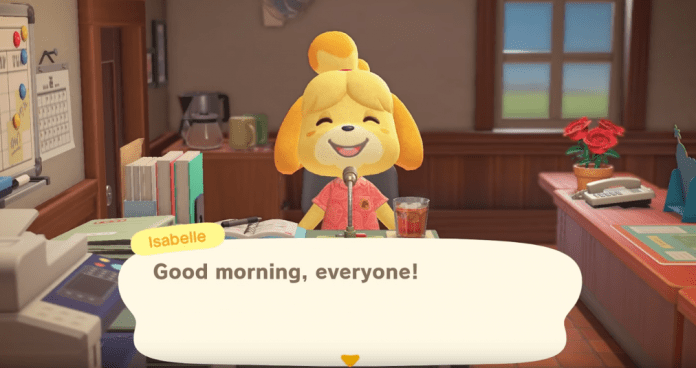 Nintendo held an Animal Crossing-focused Nintendo Direct this morning, exactly one month before the anticipated title is set to launch on the Nintendo Switch.

In the 27-minute long video, Nintendo showcased new and returning features that have been explored in some capacity since the game was revealed at E3 last year, went over future development plans and answered some frequently asked questions.

“The Animal Crossing games offer players a unique and relaxing escape from the stresses of everyday life, and Animal Crossing: New Horizons builds on that by letting players build their own island utopia from scratch,” said Nick Chavez, Nintendo of America’s Senior Vice President of Sales and Marketing, in a press release. “When Nintendo Switch owners pack their virtual bags and move into their new island home, they will experience more ways to customize their Animal Crossing life than ever before. Just like Nintendo Switch itself, the game lets you play the way you want to play.”

Before you board the flight towards your future with Nook Inc., players will choose an island from a range of options and will be asked which hemisphere they live.

“When the seasons change on the island, so do the activities,” a press release said.” For Northern Hemisphere residents, spring will just be starting when the game launches on March 20, so expect blooming cherry blossoms to show up soon!” Players will arrive on their Nook Inc. deserted island via the airport. The airport is open 24 hours a day and will serve as the hub for inviting other players and residents to your island and visiting friends. Up to eight players can play cooperatively on one island.

Players will also have the chance to use the airport to depart on mystery island tours, where they will be left up to the whims of the pilot and may come across crafting materials and creatures to take back to their new home.

At the start of each day, Tom nook, CEO of Nook Inc., will make broadcasts to all residents with updates about important island updates and sharing advice on how to best enjoy island living.

Nook will also offer you the chance to become a homeowner, turning your rustic campsite into a beautiful sprawling estate decorated and designed to your aesthetic whims.

Animal Crossing: New Horizons offers the most customization options in the series yet, between character personalization down to building (facility and villager homes), path and nature placements. “Your island will not only be home to new residents, but also tourists as well! These temporary visitors are always welcome and can offer up items that cannot be crafted on the island,” Nintendo said. “Visitors can also participate in fun events like Fishing Tourneys and Bug-Offs, which will pop up throughout the year. Through free updates to Animal Crossing: New Horizons, new special events and seasonal guests will be introduced.”

As players progress, they will have to the opportunity to build island facilities such as the museum, tailor and resident services building, which will be open 24/7 and provide players with services such as the sale of everyday goods, item selling and advice. By collecting specific materials around the island, you can craft a wide variety of things, including tools and furniture. DIY workshops teach you how to enrich your life by crafting DIY recipes. As you become more familiar with DIY, you can even learn special skills like changing the color of your DIY furniture or decorating them with custom designs that you create in New Horizons via the Nook Link app within the Nintendo Switch mobile app that is set to launch in March around the time the game launches. Players will be able to use the QR reader in the Nook Link app to import custom designs from New Leaf and Happy Home Designer.

View the FAQ portion of the Nintendo Direct below: