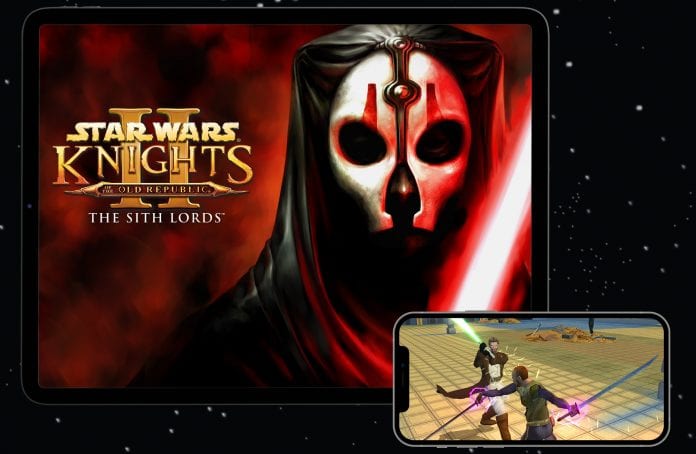 The sequel to Knights of the Old Republic is getting a brand new release for mobile platforms, bringing the classic adventure into the palm of your hands.

Bioware’s original Knights of the Old Republic game has been ported to mobile platforms for a while now, but fans of its sequel, The Sith Lords, have only been able to replay the game via PCs. That changes next week, however, as Aspyr brings the game to mobile devices.

The RPG will be playable on iPhones, iPads, and Android devices December 18th (next Friday) for $15, bringing a revamped experience tooled for touchscreens.

Set five years after the events from the award-winning Star Wars Knights of the Old Republic, Sith Lords have hunted the Jedi to the edge of extinction and are on the verge of crushing the Old Republic. With the Jedi Order in ruin, the Republic’s only hope is a lone Jedi struggling to reconnect with the Force. As this Jedi, players will be faced with the galaxy’s most dire decision – follow the light side or succumb to the dark.

Choose the light or the dark side of the Force as you progress through the story.
The choices made will affect the player’s character, their party and those who may join the quest.
Add fan favorite characters to your party including HK-47, Canderous Ordo, and Kreia!
Optimized for mobile play with new touch screen controls.

Will you be diving back into this game on your phone?