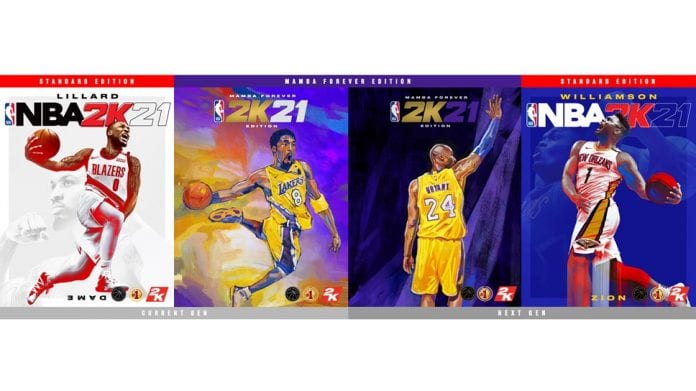 Kobe Bryant, arguably one of the greatest NBA players of all time, is being honored in NBA 2K21. After it was announced that Portland Trail Blazers 5-Time All Star Point Guard Damian Lillard would be the face of the current-gen version of NBA 2K21, with New Orleans Pelicans rookie sensation Zion Williamson gracing next-gen covers, 2K Games has announced a new edition to replace the Legend Edition.

“Each of our cover athletes represent different eras of the game of basketball – Damian Lillard dominates the court today, Zion Williamson is a standard bearer for the next generation of NBA superstar and what more could be said about Kobe?,” stated Alfie Brody, Vice President of Global Marketing at NBA 2K. “Three athletes representing the current, future and storied history of the game. Today’s exciting announcement is just the first of many for NBA 2K21; it’s going to be a huge year for basketball fans and NBA 2K gamers.”

Contrary to other publishers and developers, 2K Games is planning on going against the grain when it comes to upgrading NBA 2K21 to next-gen consoles. The Damian Lillard-adorned current-gen cover will be $59.99. Whereas, the next-gen version of NBA 2K21, featuring Zion Williamson, will run for $69.99. Bridging the two generations together will be the Mamba Forever Edition ($99.99), which will include dual-access where purchasing the edition celebrating Kobe Bryant on either current or next-generation platforms provides a copy of the standard edition game on the other generation at no additional cost, within the same console family.

If we do the math, 2K Games is making it to where players will either need to pay roughly $100 with the Mamba Forever Edition or $130 for both Lillard and Williamson editions.

In a time where most video game publishers and developers are going the extra mile to make their games free to upgrade to next-gen devices, it’s really messed up that 2K isn’t going this route. Rather, they’re going to force NBA 2K fans to shell out even more money on top of the hundreds of dollars spent for PlayStation 5 and Xbox Series X to play their game on next-gen.

Granted, 2K is touting that NBA 2K21 is built from the ground up for next-gen systems. Furthermore, they will make it easy to transition all your progression and in-game currency between generations.

Yet, despite all this innovation, it all just doesn’t feel right to ask players to pay when everyone else is offering their next-gen game upgrades for free. Between Smart Delivery, Dual Entitlement, and whatever Sony will call PlayStation 5‘s free upgrade shtick, it’s almost as if 2K is failing to read the room. Especially during a pandemic which has already created a lot of financial turmoil that may see new console sales under-perform this Holiday season.

Both the Mamba Forever Edition and Damian Lillard Standard Edition of NBA 2K21 will release on September 4, 2020 for Xbox One, PlayStation 4, Nintendo Switch, Google Stadia, and PC.

The Zion Williamson Standard Edition will launch alongside PlayStation 5 and Xbox Series X when they release Holiday 2020.