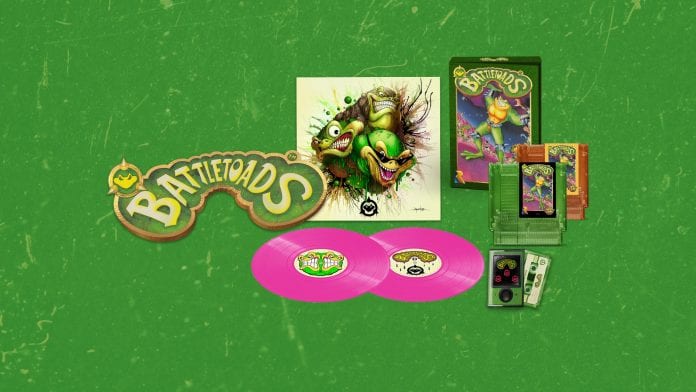 “Battletoads’ long-awaited induction into iam8bit’s estimable Legacy Cartridge Collection goes well beyond the average re-release, a choice most appropriate for the ‘90s classic that hopped, kicked, and jumped past any opponent that attempted to box it in,” a press release said. “Each cartridge – either colored Translucent Zitz Green or a rarer Pimple Brown (1-in-8 odds of getting that ultra-limited shade) – comes in a premium fold-out box sporting painstakingly restored full-color archival artwork, and comes with exclusive pack-ins, as well as (in the collector’s tradition) a foil-stamped dust cover.

The time-warping Battletoads: Smash Hits Vinyl Soundtrack, meanwhile, packs in all the legendary David Wise tunes you remember from the ‘Toads’ first rollicking collision-course adventure, before the second disc turns the dial forward to 2020 to afford David Housden’s heavier, metal-drenched score the immaculate pressing it so heartily deserves. Watch out for artist Alex Pardee’s pop-up jacket design, exclusive to iam8bit.com; this 3-D pop-up gatefold does Zitz, Rash and Pimple proud, “Kiss My Fist” style. As a collector’s bonus, 500 randomly selected buyers will be gifted with the surprise of Rash’s Toadally Rad Adventure Cassette in their order. This full-on sonic journey charts the fan-favorite Battletoads’ tumultuous arc throughout the games, incorporating tracks from the original Battletoads, Battletoads in Battlemaniacs, Battletoads Arcade and the newly-launched Battletoads for Xbox One, Windows 10, Xbox Game Pass and Steam.”