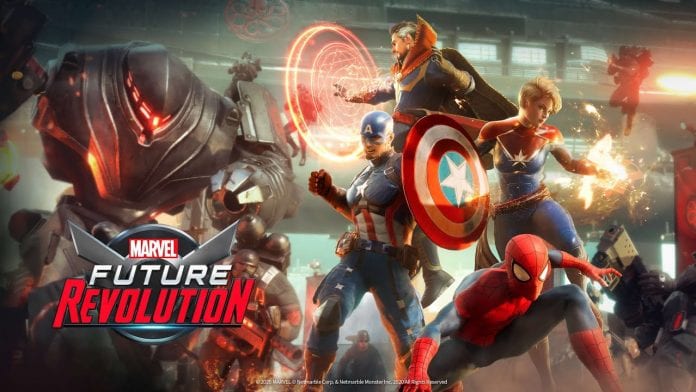 At PAX East, the creators of the long-running mobile game Marvel Future Fight, Netmarble announced that they had collaborated with Marvel again for a new project. Their latest game is Marvel Future Revolution and it’s Marvel’s first open-world RPG on Mobile devices.

Marvel Future Revolution features an original story written by Marvel Comics writer Marc Sumerak. The synopsis for the story is as follows: MARVEL Future Revolution starts with numerous Earths converging across all dimensions to form an entirely-new ‘Primary Earth’. As an agent of the newly formed ‘Omega Flight’ Super Hero team, players will work together to battle an onslaught of Super Villains, confront their suspicious behaviors and defend the universe.

Players will be able to play as beloved heroes like Captain America, Spider-Man, Captain Marvel, Doctor Strange, among several others. The new mobile game is set to take these characters to a massive open universe with merged locations like Xandearth, Sakaar and to explore.

As mentioned above, this is not the first time Marvel and the South Korean mobile gaming company, Netmarble, have worked together. Their previous success with Marvel Future Fight caused this alliance to move forward into making this ground-breaking mobile open-world RPG.

“Netmarble is thrilled to continue our successful partnership with Marvel, especially as we are nearing the five-year anniversary of MARVEL Future Fight,” said Andy Kang, Executive Producer of Netmarble. “We look forward to share a whole new open world experience with Marvel and mobile gaming fans everywhere.”

“For fans that have dreamed of exploring the Marvel Universe in a sprawling, open-world setting, MARVEL Future Revolution  gives players the chance to not only journey through these strange new locations, but also customize their favorite Heroes into never-before-seen costume combos,,” said Bill Rosemann, VP and Head of Creative at Marvel Games. “We’re excited to be working with Netmarble once again after nearly five years of continued success with MARVEL Future Fight, and look forward to MARVEL Future Revolution providing countless hours of fun for players to battle alongside their friends and save our universe.”

Additional trailers featuring Villains, Heroes, Costumes, and the 3D open world have been added to the official Marvel Future Revolution YouTube page, which you can see below.

No release date has been made official for Marvel Future Revolution. Stay tuned for more.