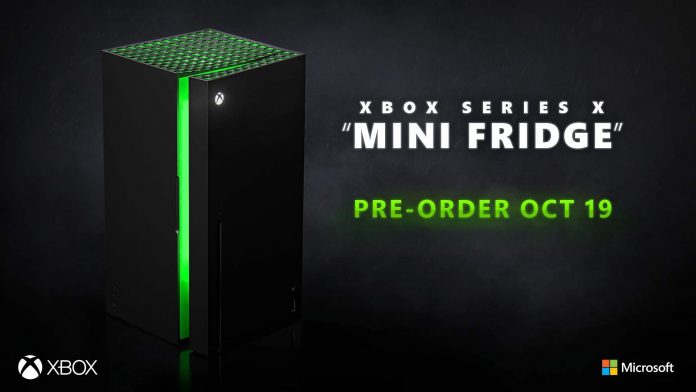 What seemed like a random meme teasing the design of the Xbox Series X has now become a real thing, and personally I can’t wait to get it.

Microsoft announced on Twitter earlier this year that if they gained enough votes they would make the Xbox Series X into a mini fridge, running with the jokes that the console already looks like one. Turns out they got the votes, and Microsoft held to their word. At E3 they showed off the actual fridge, with a full scale one to be exact, and announced we would get the mini fridge later this year.

Today Microsoft announced that the fridge will be sold exclusively at Target for $99, and for those around the world you can find it at GAME in the UK (£89.99); and fans in France, Germany, Italy, Ireland, Spain, Netherlands, and Poland can grab their own at GameStop EU (€99.00). Pre-orders begin on October 19th!

The mini fridge includes two shelves for snacks, holds up to 12 cans of whatever you drink (I’ll probably fill mine up with DrPepper), and has a USB charger port on the front. The fridge also lights up just like the Series X, and also includes DC power so you can take it on the go.

Hopefully these are not as hard to get as the console themselves because I desperately want one! Now if someone would kindly contact Sony about make the original PS3 into a George Forman grill…..