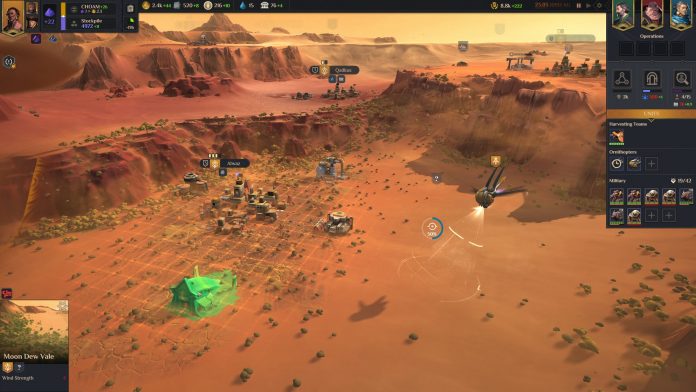 The much anticipated multiplayer update for Dune: Spice Wars, arrives today, allowing gamers to battle each other for the fate of Arrakis.

What’s a great RTS/strategy game without multiplayer? Well for me, that’s pretty much all of them as I’m terrible at multiplayer outings. But for many others, it’s a crucial part of the experience.

Dune: Spice Wars has been out in Early Access for a couple months now, and fans have been eager to see when Multiplayer would arrive. Well, wait no more! Today, the developer announced the latest patch brings the multiplayer mode and they’ve released a new trailer to mark the occasion (keep your eyes open for the quote at the very end):

Today, band together in 2v2 matches or face each other in a free-for-all of up to four players. Take the reins of either the Atreides, Harkonnen, Fremen, or Smugglers. Any open spots can be filled with AI-controlled factions ranging in difficulty from easy to insane, and each game can be tailored to suit your preferences, including map size and sandworm, storm, and Sietch activity. Victory conditions are also up to you!

In addition to multiplayer, we’ve also reworked every development tree with a focus on synergy between factions, and added new political resolutions, events, regions, and a whole load of other improvements which you can see in the patch notes below.

We’ve taken great efforts to make Spice Wars true to Frank Herbert’s source material, to deliver an experience that delivers the same sense of grand machinations, subtle political plotting, and great reversals. With multiplayer, the potential for these slow boils and epic moments skyrockets, as players vie for the upper hand on each stage of war.

Check out the Dune: Spice Wars blog post for the full list of patch notes and definitely get on top of this game if you haven’t already yet.