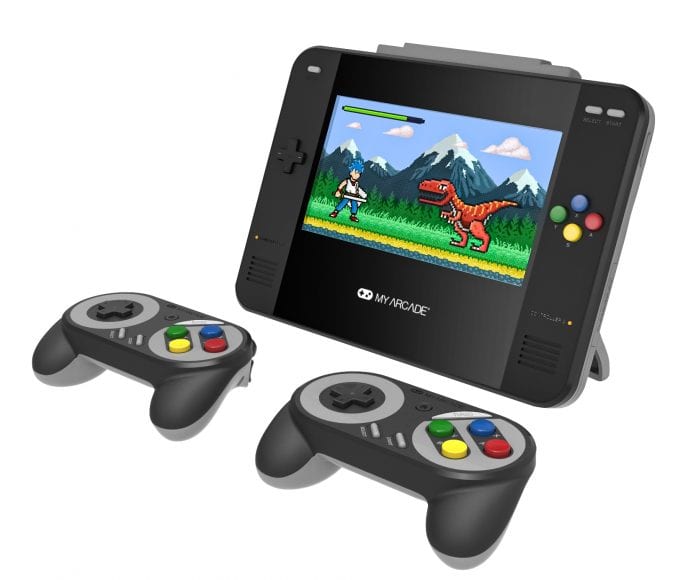 My Arcade is once again at CES this year and they brought a new mini-Arcade machine and a follow up to their hybrid retro console.

Last year at CES, My Arcade revealed the Retro Champ, a swanky console that allowed you to play your original NES cartridges (as well as Famicom) on the go! It was a hybrid, much like the Nintendo Switch where you could play via a built-in screen or hook it up directly to a TV set. At this year’s CES, they’ve announced a follow-up: the Super Retro Champ.

As the name implies, the new console allows you to play Super Nintendo (and Super Famicom) cartridges, but you’ll also be able to play your old SEGA Genesis games as well! The overall format of the console remains the same, which is a nice option for retro enthusiasts, and those who can’t wait for the Nintendo Switch eShop to finally update with some classics. The Super Retro Champ is slated to arrive this year for $109.99: On top of the console, My Arcade also announced a new Street Fight II: Champion Edition mini-arcade cabinet for collectors to pick up later this year for $50: This officially-licensed cabinet comes equipped with My Arcade’s patent pending CO-VS technology, allowing players to connect two Micro Players for intense head-to-head competition. Standing at 7” tall with a 3.5” screen, the Street Fighter II: Champion Edition Micro Player is a 1/10th scale replica of the original 1992 arcade cabinet. It features unique button/joystick switches and a widened control panel to accommodate the traditional six-button layout of the original arcade. The packaging and cabinet will showcase artwork inspired by the original arcade cabinet as is customary for the Micro Player line.

Which of these are you looking forward to picking up most?