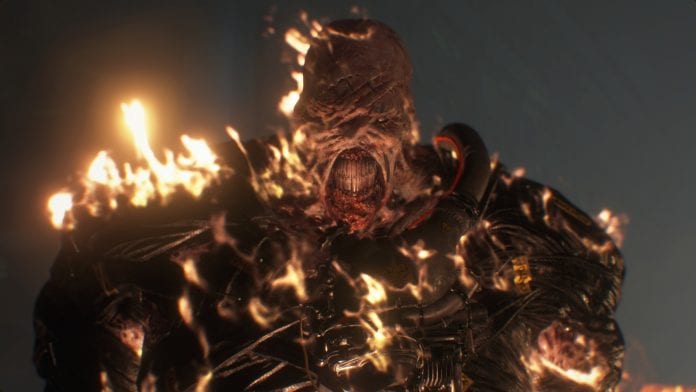 After just a month removed from its announcement, Capcom has released a new trailer for the Resident Evil 3 – Nemesis remake. It gives us our first look at Nemesis and he’s using a flamethrower. See it below…

If the idea of Nemesis burning everything down with a flamethrower hasn’t sold you on the Resident Evil 3 remake, then I really don’t know if anything could. A new trailer for the highly-anticipated remake has arrived delivering some solid shots of gameplay and remade scenes between Jill and Carlos.

Late last year, Capcom announced the Resident Evil 3 – Nemesis remake during a Sony State of Play. With a release date of April 3, 2020 scheduled, Capcom is just getting started with their marketing campaign. That means we’ll likely have a few more trailers in the coming months.

Which could, in turn, see more of the flamethrower-equipped tyrant in all its glory. The Resident Evil 3 – Nemesis remake will release on April 3, 2020 on PlayStation 4, Xbox One, and PC. It’s said that it will not have alternate endings like the original game, making it a linear tale. The remake will also include the 4v1 online multiplayer game, Resident Evil Resistance.