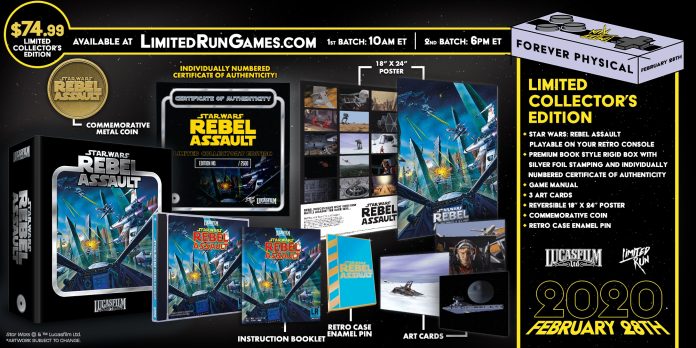 Limited Run Games is continuing to bring Star Wars gaming fans the goods, with the announcement of a special edition release of Rebel Assault.

Throughout last year, Limited Run Games released a handful of classic Star Wars gaming titles in all new collector’s editions, and it looks like they’ll continue to bring the goods for fans/collectors this year. They’ve announced that next Friday (February 28th) they’ll release two versions of the classic Rebel Assault game for the Sega CD.

The basic version brings the retro vibes by emulating the original Sega CD packaging, while the more limited edition will bring fans a BUNCH of sweet extras to play around with:

Got the first batch of @LimitedRunGames #StarWars orders in, and they’re pretty neat! Really cool to see side by side with the original releases. #retrogames #collecting pic.twitter.com/SNbGy12sMP

Having snagged some of their previous ones from last year, and as a big Star Wars game collector, I’m excited to see them continue with even more games this year. Will you be trying to snag this next week?