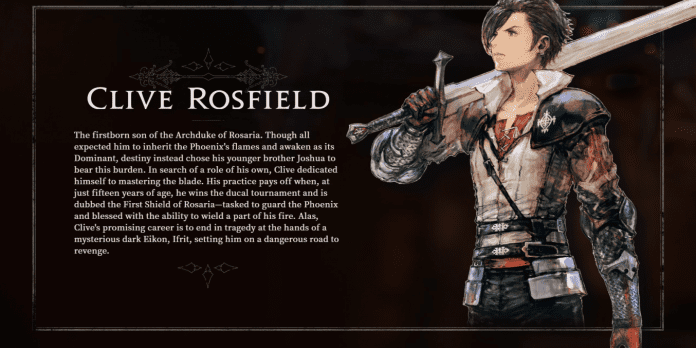 Square Enix has launched the official site for Final Fantasy XVI, offering the first story synopsis for the new action-RPG and some stunning artwork.

This morning brings fresh, tantalizing, details on the next numbered Final Fantasy game by launching the title’s “teaser website.” Over there you can find new art for the various characters in the game and their connections to one another. What will really be of interest, however, is the fact that we now have some plot details to begin thinking about:

FINAL FANTASY XVI brings players into a world where Eikons are powerful and deadly creatures that reside within Dominants—a single man or woman who is blessed with the ability to call upon their dreaded power. The story follows Clive Rosfield, a young man dedicated to mastering the blade, who is dubbed the First Shield of Rosaria and tasked to guard his younger brother Joshua—the Dominant of the Phoenix. Unexpected events set Clive on a dark and dangerous road to revenge.

Yep, sure sounds like a Final Fantasy game! With these details we can piece together some more about what all was going down in the game’s first reveal trailer. Even better, they have also revealed the key art for the game (which you’ll end up seeing as the box cover and such) that makes for a gorgeous poster. Obviously there’s still no release date yet, but it’s nice to get even a trickle of information on Final Fantasy XVI. The game is set to launch on the PlayStation 5.