Earlier today, Nintendo released a new trailer for Detective Pikachu that showed off new features, characters and game-play footage for the upcoming game.

Some of the hardboiled new game elements highlighted in the trailer include the following:

• Trouble in Ryme City!: Ryme City is a place where people and Pokémon live together. But recently, many friendly Pokémon are behaving oddly for no apparent reason. While Pikachu and his friend Tim search for Tim’s father, Harry, they unwittingly stumble into the mysterious case of the problematic Pokémon. Can they solve the mystery and also find Tim’s father? Cue the dramatic music…

• The Mysterious Mewtwo: While many different Pokémon appear in Detective Pikachu, the one who seems to hold the biggest connection to the overall mystery is Mewtwo. How is Mewtwo connected to everything? And why does Mewtwo know Pikachu?

• A Colorful Cast of Characters: Many charming characters roam the streets of Ryme City. These include Pablo Millan, owner of Pikachu’s favorite café; Frank Holliday, an inspector at the Ryme City Police Department; and Meiko Okamoto, a camera operator for the local TV studio. Meeting and interrogating all of these characters throughout the game is part of the fun.

Help solve the mystery when Detective Pikachu launches exclusively for the Nintendo 3DS family of systems onMarch 23. For more information about the game, click here.

Also launching on March 23 is a special edition Detective Pikachu amiibo figure. This extra-large amiibo can unlock cutscenes if tapped in the Detective Pikachu game, revealing a combination of hilarious content that might 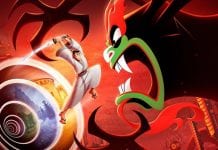