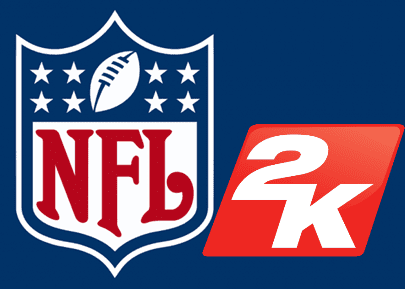 The NFL and 2K Games have made a surprise, yet somewhat vague announcement. Today, the two companies announced a multi-year partnership that will comprise of multiple games. However, they will be non-simulation games. Meaning the partnership won’t infringe on the long-term exclusive simulation deal made with Electronic Arts.

In the announcement, 2K confirmed that multiple games are in early development, but that any further details and release dates would come at a later date. Although, they did indicate that they are expected to release in the 2021 calendar year.

The announcement marks the first time in 16 years that a developer other than Electronic Arts would be working on an NFL game. The makers of the NBA 2K and WWE 2K franchises are no stranger to the gridiron, though. From 1999 to 2004, 2K published the NFL 2K series, which is still regarded as one of the best NFL series ever made.

“The NFL is one of the most successful sports brands in the world, known for creating incredible entertainment for fans,” said David Ismailer, President of 2K. “We’re thrilled to be back in business with the NFL in a partnership that will span multiple video games centered on fun, approachable and social experiences. It’s exciting to bring together 2K’s expertise in creating award-winning sports games with the NFL’s renowned status as a world-class entertainment and sports organization.”

“Expanding the NFL’s presence in the world of gaming has become a focus for the League as we look to grow the next generation of our fanbase and reviving our partnership with 2K was a natural step in that effort,” said Joe Ruggiero, Senior Vice President of Consumer Products at the NFL. “2K is a worldwide leader in sports video games, with a proven track record of creating best-in-class and award-winning games and we look forward to sharing more about the projects we are working on with them in the future.”

Both the NFL and 2K Games declined to go into further details on whether these games would be for mobile, next-gen consoles, or even Nintendo Switch. They didn’t even really answer IGN when asked what “non-simulation football game experiences” actually meant.

“Our goal is always authenticity, depth, fun and as it relates to these titles – approachable and social football experiences. We think this is a good opportunity to service a more casual market, and our research shows there’s an appetite for that.”

The term non-simulation football game could mean a NFL managerial-type game or something else entirely. However, it won’t be a direct competitor to EA Sports’ Madden franchise.

While it’s pure speculation, the deal could have been struck in an effort to develop a well-crafted story game for the NFL. Something EA hasn’t been able to accomplish. 2K has a long history of providing their players with immersive stories for their sports titles. It could be that the future of football gaming will see gamers flocking to one brand for the hard-hitting X’s & O’s and another for deep, interactive storytelling.

Regardless of what 2K and the NFL have in store, the fact is more football is on the way and who doesn’t want more football? NFL 2K games are set to roll out in 2021. What games would you like to see them make?