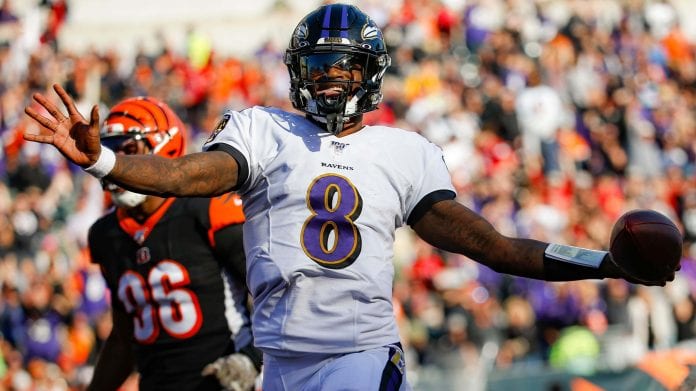 Lamar Jackson as the Madden NFL 21 cover athlete was really a no-brainer by Electronic Arts‘ sports division. The Ravens QB dominated the league, during the 2020 season, with his unique blend of running and passing mixed with his unbridled ability.

He was the first player in league history to produce more than 3,000 yards passing and 1,000 yards rushing in a single season. Then, at the end of the season, the former Heisman trophy-winner added the NFL MVP trophy to his trophy case, all at just 23 years old. Now, he’s the Madden NFL 21 cover athlete. Something he said was a dream come true.

“It’s always been a dream of mine since I was a little kid, since I first started playing Madden, It’s dope. I have every Madden. To me, to be on the front of it, it’s a dream come true.”

As for the fabled Madden curse, Jackson isn’t sweating it. In fact, he’s looking at the success of another NFL MVP-turned Madden cover athlete to shrug off the stigma.

“Patrick Mahomes is on the front and he won [Super Bowl] MVP, I want that curse. I hope that’s a curse.”

While the NFL and video game world are celebrating the news, sitting on the sidelines is EA Sports who had the rug pulled from under them today. Normally, they’d have a ton of pomp and circumstance attached to a Madden cover athlete reveal. Instead, they sat dejected on the sidelines.

When the @Ravens leak your Cover Athlete…😑 pic.twitter.com/qO5I90YxNE

No word yet on an official release date.