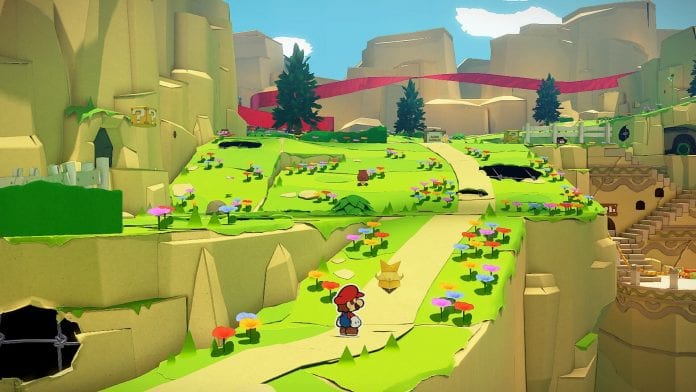 A brand new Paper Mario adventure is coming to Nintendo Switch this summer! Nintendo has released an announcement trailer for Paper Mario: The Origami King and it is surprisingly intense for a Paper Mario title.

Mario faces one of his most thrilling challenges yet in Paper Mario: The Origami King when the dangerous King Olly unleashes his plan to fold the entire world. Just when matters couldn’t get worse, he’s bound Princess Peach’s Castle in giant, colored streamers and transported it to a distant mountain. He’s even transformed Bowser’s minions into Folded Soldiers and enlisted them in his treacherous cause.

I wouldn’t have thought that a dramatic tone would work for a Paper Mario game, and yet I find myself loving it. Everything from the dark, insidious tones to the gorgeous origami-themed visuals have me itching to play this game. Plus, according to the PR, Paper Mario: The Origami King will include new elements that bring the franchise to the modern age.

Paper Mario: The Origami King will introduce new abilities like the 1000-Fold Arms, which allows you to interact with the landscape by stretching out and pulling, peeling and revealing new locations, helping you to solve puzzles and uncover unexpected surprises.

The new game will even feature a new ring-based battle system. This system lets you flex your puzzle-solving skills to line up scattered enemies and maximize damage in exciting turn-based battles.