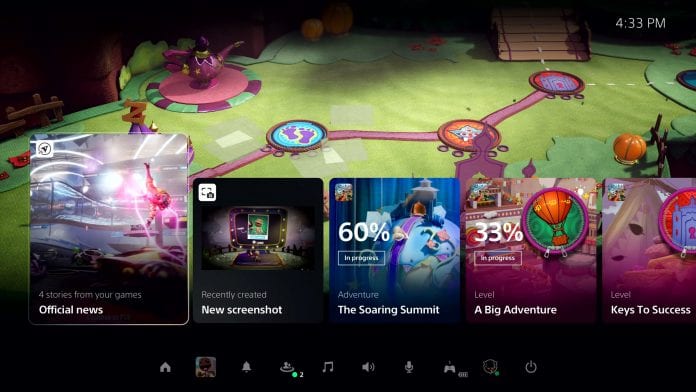 This morning brought a surprise State of Play video, showing off the PlayStation 5’s all new user interface and the cool things we can do from it!

I’m not normally one to get all worked up by the smaller technical details for something like a new UI layout, but I’ll be damned if this look at the PlayStation 5 isn’t giving me some hype. This morning, Sony dropped a surprise State of Play video entirely dedicated to the user interface. You can watch the whole thing below, but I’ll also be highlighting what I feel are the coolest details:

First of all, it looks really sleek and clean. While what we’re seeing is a demo clearly meant to show it off, I’m impressed with how smooth all the transitions seem to be. Here are some of the basics of what to expect:

* “Cards” are part of the “Control Bar” and offer up all the information and options you need (including controller settings and console info) without having to leave your game. Some of the other data offered are details specific to the game you’re playing, like trophies earned, overall progress, and relevant news. * Depending on the game, some Cards will show you current activities within the game itself and within specific levels. You can look at the objectives you still have to complete within the level and even how much estimated time is left to beat that level from where you left off!

Some PlayStation 5 titles will even let you jump back to specific parts of the game to wrap up unfinished levels or objectives, no matter where you are in the game currently. This means you won’t have to go all the way back to a main menu or in-game level select.

This is the feature I think is one of my favorites, though I’m curious to see which titles will be able to take advantage of it. Story based games (like The Last of Us Part II or any RPG) don’t seem like they would work for this kind of feature. * As mentioned, the Control Bar will let you look at unfinished objectives within a level/game, but on some titles you’ll have the option to get HINTS on how to complete them. This is “Game Help,” a benefit included for PlayStation Plus subscribers (again only for some PS5 games).

Game Help provides hints and tips on where to go for certain objectives, even giving you instructional videos to watch, all without leaving the game or having to go online elsewhere. Hell, the hints can even be viewed via picture-in-picture mode or forced into a sidebar. This means you can watch the hints WHILE still playing your game in real-time.

* This picture-in-picture option extends to the new Party feature for interacting with your online friends. You’ll now be able to join parties, chat with friends, and even watch their shared gameplay video without ever leaving your own game.

* Screenshots/Recordings and sharing can all be done via a dedicated button on the controller (much like it is now). These can all be captured in 4K and shared online or directly with those on your friends list.

On top of editing pictures directly, the PS5 also allows for Voice Dictation of messages (the controller has a built-in microphone). So you won’t have to scroll and “type” using the controller anymore!

Some games will also include “spoiler warnings” when you share them, so as not to ruin the experience for others. * The PlayStation Store is no longer a standalone App you have to open up. It’s integrated directly into the system, so you can browse and buy games directly from the console home page without bouncing around.

Again, all in all it just looks like a smoother all around experience. I can’t wait to dive into it more on November 12th. What do you think of the new PlayStation 5 UI?