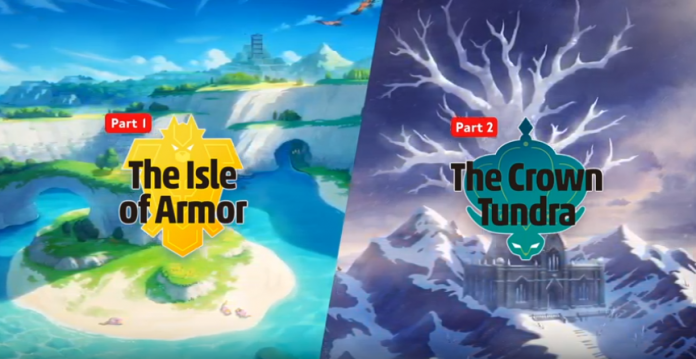 The Pokemon Direct came and went with an announcement of Gigantamax proportions! We unpack it all, within…

Since Pokemon debuted on the Game Boy all those years ago, the idea of expanding the Pokemon adventure came in the form of a new version of said Pokemon game. Thankfully, Game Freak and The Pokemon Company announced today that that way of thinking is a thing of the past.

The team kicked off their highly-promoted event with a beautiful reveal of the new Pokemon Mystery Dungeon game. What followed, though, was something unprecedented. Game Freak announced that they have two expansions in the works for the new year, for both Pokemon Sword and Pokemon Shield.

The two expansions are The Isle of Armor and The Crown Tundra. Both present unique, uncharted environments of the Galar region for trainers to explore using existing save data. That means all the Pokemon you’ve caught so far and all the progress you’ve made will come along on two brand new journeys. The first new landscape will be available in June 2020, with The Isle of Armor. As summer is all about fun in the sun and going to the beach, The Isle of Armor will take trainers to an unexplored island of the Galar Region. However, this won’t be a getaway.

Trainers will be able to battle and catch loads of previously unavailable Pokemon from this sun-kissed isle. Furthermore, they’ll be able to train in the same dojo as former champion Leon, under the watchful eye of Master Mustard. In an even cooler twist, you won’t be alone as you train. You’ll earn a new rival at this dojo in the form of the Poison-type trainer Klara (Sword) or a Psychic-type trainer Avery (Shield). More importantly, you’ll train alongside the new legendary fighting Pokemon Kubfu, who eventually evolves into one of two styles of Urshifu, either Single Strike Fighter/Dark style or Rapid-strike water/fighter style. Included with The Isle of Armor expansion will be long-awaited Gigantamax forms for all final evolutions for Pokemon Sword and Shield starter Pokemon. As the temperatures drop and snow falls, Pokemon will send trainers to the uncharted icy part of the Galar Region, The Crown Tundra. This frozen outpost will see even more previously unavailable Pokemon surface to catch and battle. The Crown Tundra is said to be mainly about exploration and it looks like there will be plenty to explore with old ruins and residents to see. Plus, Pokemon confirmed that The Crown Tundra region will have a legendary Pokemon to find, Calyrex. Calyrex is a Psychic/Grass type Pokemon that is said to have once ruled over part of the Galar region, including The Crown Tundra. The Crown Tundra expansion will also feature co-op play, where players can explore underground areas with other players to find legendary Pokemon. What’s even more amazing is that the legendary Pokemon you find will be from every previous Pokemon game!

Both expansions combined are set to import over 200 more Pokemon into Pokemon Sword and Shield. That’s a mind-blowing number! Add those to incredible new regions on the way and the adventure will continue long after you’re crowned Pokemon Champion! Until then, Game Freak has added a little surprise for trainers to check out right now. With today’s free update, trainers should go to Wedgehurst Station to meet their soon-to-be rival. More importantly, though, they should meet the Galarian Slowpoke. Give a shot at catching it. That way, you can be ready to collect the items that will either evolve it into Galarian Slowbro at The Isle of Armor or Galarian Slowking at The Crown Tundra.

Pre-purchase for the Pokemon Sword and Pokemon Shield Expansion Pass is available now for $29.99 on the Nintendo Switch eShop.