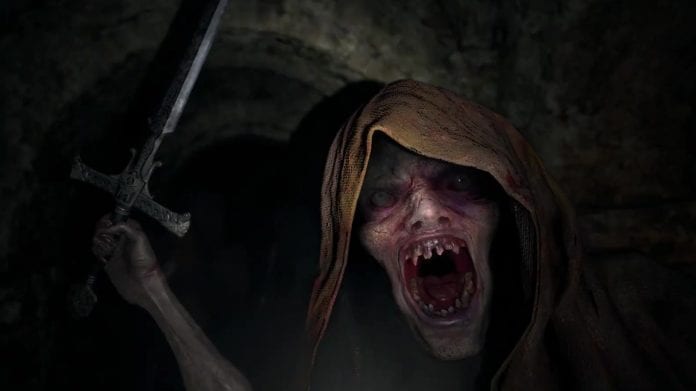 Last week, Capcom announced that they would be holding a Resident Evil Village trailer, their 8th mainline installment in the horror franchise. Included with the announcement was a sizzle reel that showed off a few snippets of the titular village and the debut of the Tall Vampire Lady. Naturally, this new character took the internet by storm, sporting countless memes.

With today’s showcase came a new trailer where we learned that her name is Lady Dimitrescu, that something has escaped and is in her castle, and the fact that she’s the mother to daughters who can turn into swarms of insects. It’s hard to say right now but from the encounters Ethan has with her, the lady of the castle seems like the latest Resident Evil big (tall) bad.

Check out the new trailer for Resident Evil Village below…(Disclaimer: No Tall Vampire Ladies were harmed in the making of this trailer.)

Resident Evil Village continues the story of Ethan Winters, first set in motion in Resident Evil™ 7 biohazard. The latest entry combines pulse-pounding action with signature survival horror gameplay synonymous with the Resident Evil series. In today’s first extensive look at gameplay, the development team revealed several new details including some features which harken back to fan-favorite elements from previous Resident Evil games. Protagonist Ethan will now be able to purchase and sell items, buy recipes for crafting, and customize weapons with a merchant dubbed “The Duke.” Using materials found throughout the game, he will be able to craft invaluable consumables needed to survive the terrors of the village. Utilizing these provisions will also involve more strategic planning, with a revised inventory system based on space management that may be familiar to series fans.

Overall, this trailer does a lot to show just how visually stunning this 8th game is…in an everything is out to kill you, gothic sort of way. Furthermore, they really increase the terror factor with the use of shadows and medieval-looking zombies. Add in the bonus villain(?)/character at the end and Resident Evil Village is looking like one hell of an entry.

Resident Evil Village will release on May 7, 2021 on PlayStation 4, PlayStation 5, Xbox One X, Xbox Series X, and Steam. Players who purchase the game on PS4 and XB1 will be able to upgrade to next-Gen consoles for free.

As an added bonus, PS5 owners can demo the game today. However it serves merely as a preview of the overall sights and sounds of the game. Players will play as The Maiden where they will need to rely solely on their wits to make their escape in this tension-filled demo, as they’ll have no way to fight or defend themselves.

This demo will be available on all platforms later this Spring.