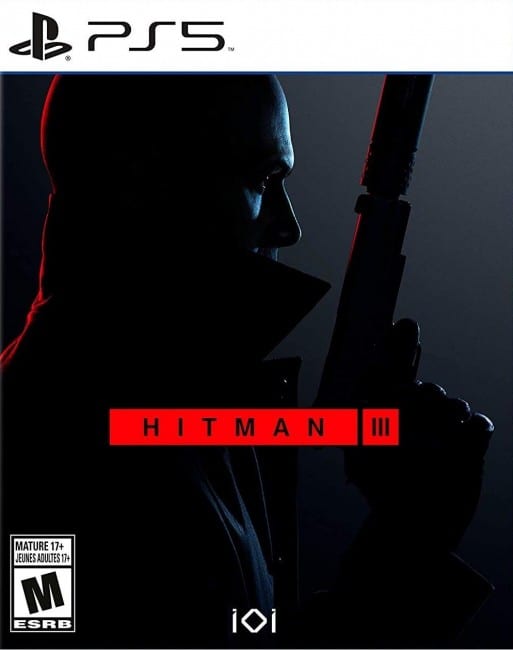 I’m not always the best at being sneaky/stealthy in games. Most of the time I usually take the Leroy Jenkins route and run in guns blazing, regardless of the situation. The Hitman series was always tough for me to play since it was more stealth-based, but I have always loved it nonetheless.

When IO Interactive rebooted the series, it felt like a second chance to step into the shoes of Agent 47 and take down my target in a more beautiful fashion than ever. While Hitman III is the “final” game in the series (for now), IO Interactive made sure to give its fans a lasting impression. This is our review of the last mission for Agent 47, Hitman III!

Hitman III takes place directly after the events of Hitman II. Agent 47 is on his most important mission yet and Diana Burnwood, Agent 47’s handler, is back to help take down the powerful group known as Providence. 47 also joins up with his friend and fellow assassin Lucas Grey to take down the evil conglomerate group. While the story has corny moments, Hitman III delivers yet another amazing storytelling adventure. Agent 47 is finally at the point of wanting something more, tired of being controlled by a system that doesn’t even trust him.

Throughout the series, Agent 47 has just been a straight-up stone-cold hitman. It’s a job, that’s it. In this version of Hitman, however, we see he has an emotional core, and it really made me connect with his character more. To avoid any spoilers I will say there are a few story moments that made Agent 47 seem a bit more human in my eyes and made me feel he was finally at the point of wanting to change and move on with his life. As I said above, the story can be corny at times but I was pleasantly surprised by some of the twists and turns wrapped into this story. 47 is almost at his breaking point and, to an extent, can’t trust anyone, but the storytelling of the IO Interactive team is pretty much full-on Hollywood tier writing. Though the game has had two movie adaptations, I would love to eventually see this relaunch turned into a CGI or Animated movie based on the events of Hitman I, II, and III. That’s how good the story is, so move out of the way other espionage flicks.

This is when I started getting a little sad playing the game. After this game, IO Interactive will be moving on from the franchise to create a new 007 title. When the news broke, I think we can all say we thought this was a match made in heaven, but damn…47 has been with us for so long. It is pretty sad that we won’t be playing as him again (or at least for some time) after this game, but maybe we will see him as an Agent in 007…who knows. All I know is this, IO Interactive totally knows how to give their number one agent a perfect send-off.

KILL YOUR WAY, EVEN IF ITS WITH A MUFFIN

The game is simple. Infiltrate a location, take down the target as stealthily as possible, and then exit the mission location without being caught. I know it seems basic, but this game gives you more ways to complete your missions than any other game I have played. Taking down enemies dressed as their co-workers or even their superior is some of the best ways to move through the missions. This option is what makes HITMAN stand out amongst other games, no matter the situation you can take down your target however you see fit. I literally mean any way you want, you can take down your target with a muffin, silenced pistol, electrical shock, drowning, pushing them off a building, fake accidental deaths, any way you want.

The game almost feels like a murder simulator at this point and, though it sounds weird, I freaking love it! The creativity of taking down these targets is one of the best qualities of this game and makes it very easy to replay the game over and over again. Even the way to start your mission is completely up to you depending on what you find during your first playthrough. I know this might be common knowledge if you have played the series before, but it really is so much fun to replay the levels with new items stashed away in hidden locations, spawning at different locations, and using different tactics to take down your target.

The gameplay is very fun and easy to get used to as well. As you progress through the game, you level up and unlock new looks and weapons for Agent 47, but you can’t upgrade any skills for your character. While there hasn’t been a skill tree in the previous games, I think it would have been great to have access to a skill tree in this game. As you progress, you could unlock new kills, health levels, or even a skill that lets you blend better while in your disguise. I know this isn’t something some gamers would like, but I just feel as if this would have been a great addition to the game to make your experience even more enjoyable.

Something that bothered me about this game was how “awake” the AI could be. The few times I did get compromised and was chased by enemies, it almost felt like some of the AI could actually see through the walls. At one point during the game, I had to climb outside of a building and hang off the ledge to not get caught. For some reason, even after moving further down the wall, the enemies could still literally see me through the wall, following my every move without actually seeing me. 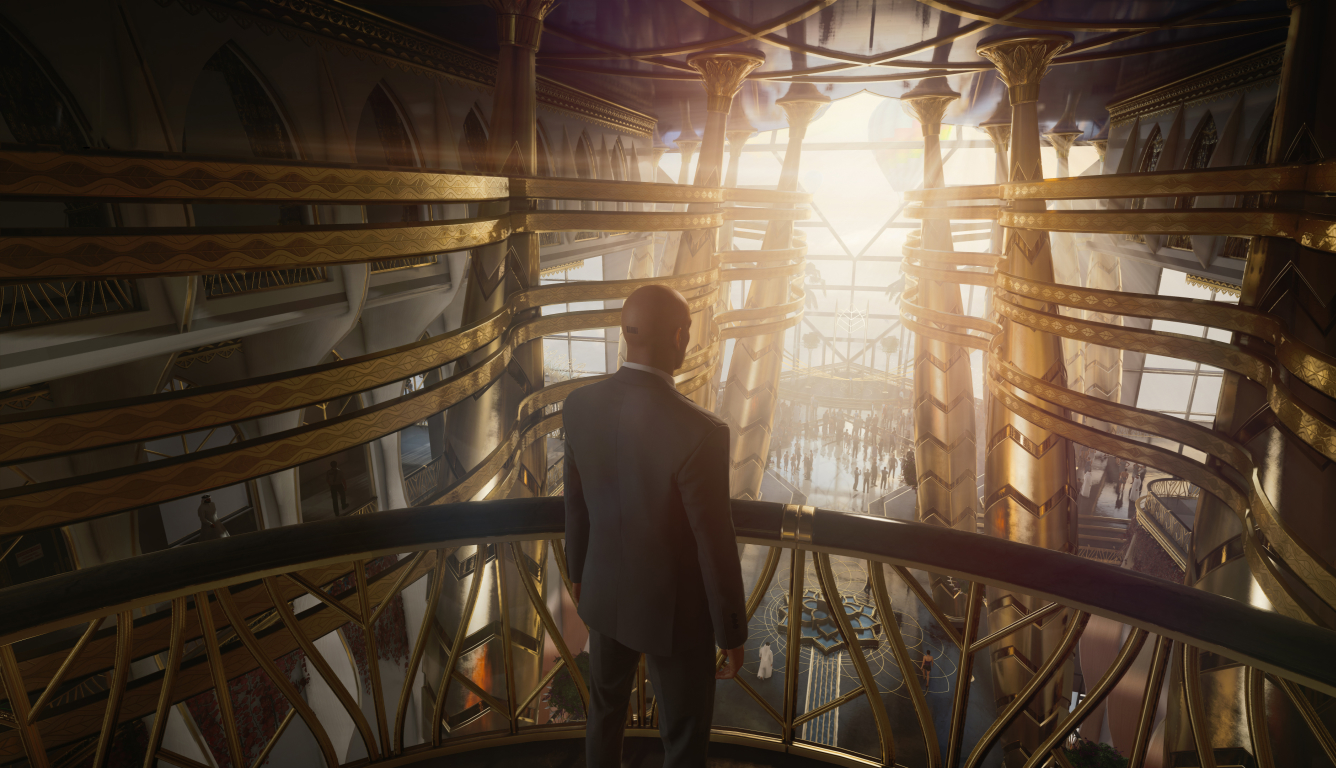 Though this isn’t a game-breaker, it was irritating and happened more than once. This could have something to do with the difficulty level being set at Professional and the enemies having a better ability to see you, but it really got irritating cause I feel like Agent 47 is the type of assassin that could kill and then just disappear into the crowd. I also had a few problems with the gunplay and them stims back to me wishing there was an active skill tree in the game.

The gunplay in the game is pretty precise for the most part, but when you move to use weapons like SMG’s, Assault Rifles, Shotguns, and more the aiming and precision dropped pretty low for me. On the last destination of the game, you are pretty much in the open and have to take on a whole bunch of enemies. Trying to take down these powerful enemies with their own weapons seemingly was the hardest challenge I faced while playing the game. Many times I found myself not landing precise kills and somehow shooting enemies in the face with a shotgun, with them somehow still getting up. This didn’t happen in the game all the time, but the times it did, I can say I was a little frustrated.

ASSASSINATIONS IN A BEAUTIFUL WORLD

The last thing I want to talk about is the locations in the game, as per usual, we get a total of six new locations to explore and they look more vibrant and better than ever. Though I wish we could have got more locations wrapped into the standard edition of the game, you can playback through the other 12 locations from Hitman 1 and 2 if you owned the games previously (which I did, but lost my save data). Even without that, the locations are expansive and it is very easy to get lost in them.

I spent at least 2 hours just walking around each level, checking for as much information and items as possible, while also just looking at the amazing looking level design. The first level is set in Dubai and you do a Halo drop to gain access to the tallest building in the world. An amazing event location that looks gorgeous on the outside, and has many floors and wonderful designs for you to explore while taking down your targets on the inside. 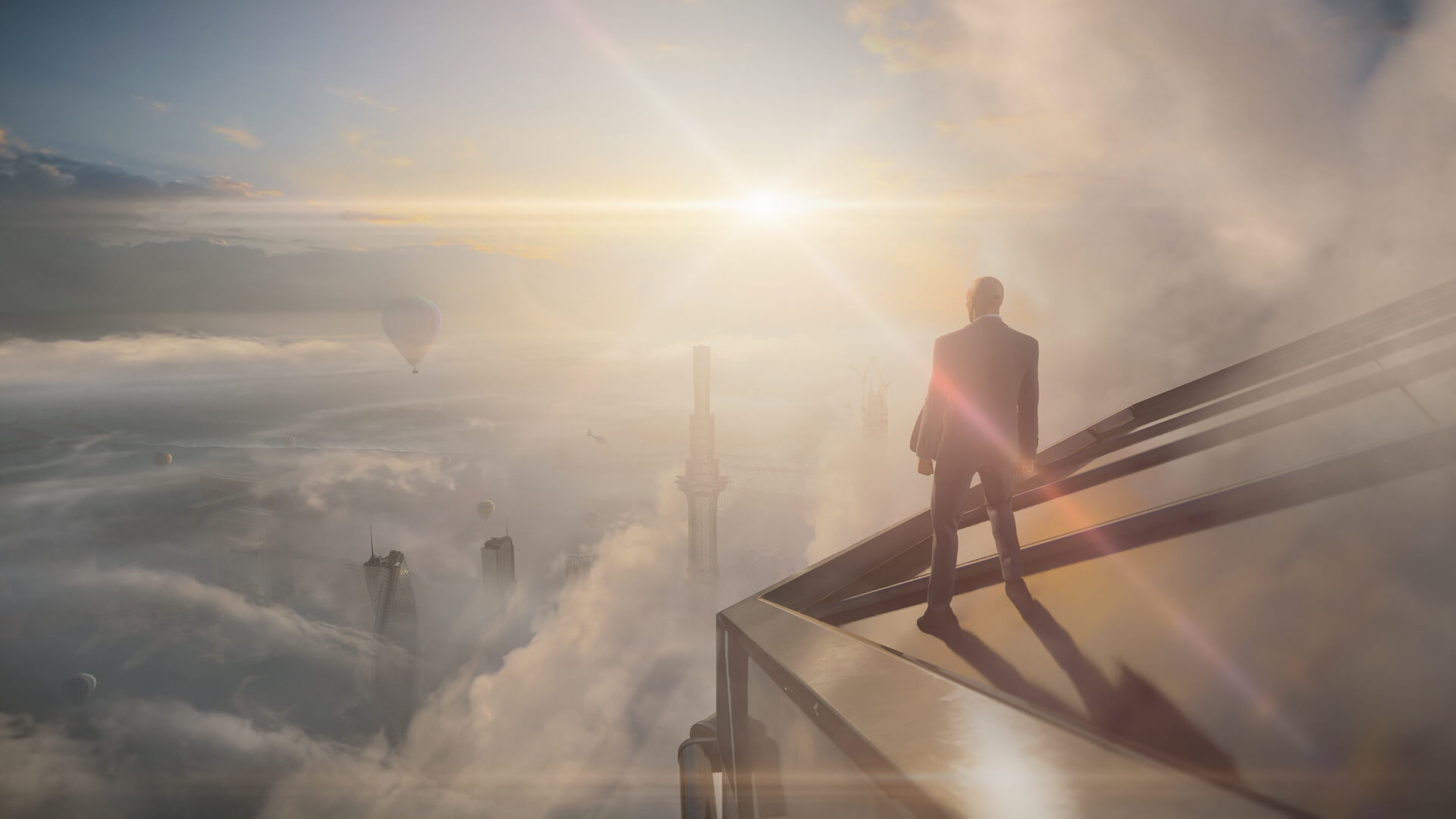 This isn’t the only beautiful location for you to explore, you can also check out exotic locations like Dartmoor, Berlin, Chongqing, Mendoza, and the Carpathian Mountains of Romania. The game is just goddamn gorgeous, even though the PS5 version is maxed out at 1800p / 60 fps, it still looks super clear, crisp, and just a wonder to gaze at all day long.

The only complaint I have in this area is a lack of a real photo mode for the game. I am a huge fan of the photo mode system in games now. When you have a game this gorgeous and it doesn’t have a photo mode I can’t help but feel like it was a missed opportunity. It would have been really cool to snap pictures in the middle of taking your target down, of the beautiful locations, or right after something epic just happened with 47 walking away from all the action behind him. Now, this could still be added to the game, and I hope that eventually, it is, especially with all the DLC coming soon, the reimagining of certain levels, and more disguises coming to the game.

Hitman III is a very fun, fast-paced game that puts you on the edge of all things espionage. Though the game was lacking a few key details I would have liked to see, overall this is the best Hitman game year to date and is a great way to send off Agent 47. With more replay value, DLC, and content than most games in its genre, this game is a must-buy for any gamer who wants more action in their life. We can only hope that Project 007 will be as fun and as interesting as the Hitman series has been over the last 21 years.