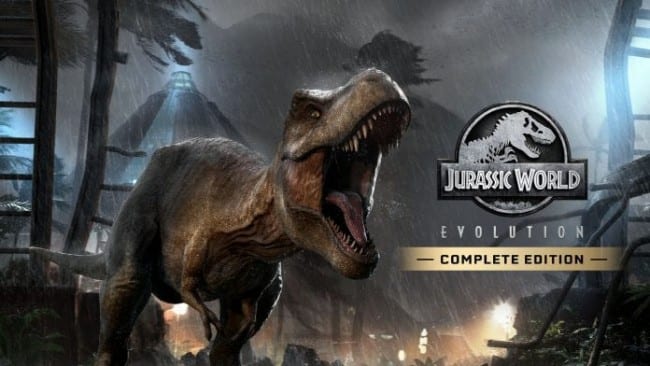 Two years after launching on the PC and other consoles, Jurassic World Evolution has finally come to Nintendo Switch in a Complete Edition! With surprisingly few compromises, this manages to be one impressive port. Read our full review here!

Life has found a way onto the Nintendo Switch. Somehow, they managed to port the park simulator to the hybrid console in a way that manages to capture the thrilling experience without too many compromises. I love Jurassic Park/World and I love sim games. As such, Jurassic World Evolution felt like a game built exclusively for me.

It had some struggles when it first launched, but a steady stream of downloadable content, and a couple of impressive expansions, has given it a great deal of longevity while improving some initial issues. For the past year I’ve been enjoying my time in the game, but have been very much looking forward to checking it out on the Switch.

With everything going on (having kids in virtual school along with a youngster) portable gaming is still the easiest, most frequent, option for me. As such, getting to play this on the Switch, even having to start over from the beginning was a treat.

If you were put off by the game’s original launch, and some of its rougher elements (which you can read more about here), this is an excellent way to come back to it. The Complete Edition, as its name suggests, includes all the DLC and expansions, even the most recent Jurassic Park one. If you haven’t been keeping up with the game over the past couple years, it’s a ridiculous amount of content that brings in a TON of dinosaurs to be researched and released, with a healthy amount of gameplay tweaks.

The result is one of the best possible versions of this game. Having come from the original PC version, I immediately noticed how the pacing of the game felt smoothed out. Timing between “contracts” and “missions” (given by one of three factions you’ll have to balance throughout the game), as well as researching/releasing dinosaurs has been drastically tweaked. Waiting for things to happen in order for you to keep playing no longer feels like a chore, or a mobile game that encourages you to spend money to speed things up. This made getting through the “tutorial island” much quicker, allowing players to get into the real meat and potatoes of the experience sooner. As you progress, you’ll encounter more challenges that will see you expand your park, give you new tools to play with, and ability to dive deeper into the nitty gritty of park building. While it doesn’t offer the same depth as other park-sim games, I think it hits all the right notes. It’s a great balance between the fun/thrill of building a dinosaur park and the simulation elements.

I won’t talk much more about the game itself. After all, it’s been out for a couple years now. Just know that the latest tweaks/polish added and included in this release make it more fun than ever. If you’re worried about how the game plays on the Nintendo Switch as a port, you can rest easy. It plays incredibly well.

Transferring sim games to a console, in general, comes with its own set of challenges. Thankfully, having already been given console ports on the Xbox and PlayStation 4, many of the kinks involving button mapping from a keyboard and mouse setup, have already been worked out. I’ve played other sim-management games on the Switch in the past (including RollerCoaster Tycoon) and none of them have felt as smooth in the controller layout as Evolution. Everything feels surprisingly intuitive and within just the first few minutes I was able to navigate the many menus, and build options without even thinking about them. Even setting the game aside for a little bit, playing other stuff, and coming back to it, I didn’t feel lost and scrambling to remember every input (which is a major deterrent for these games in the long-run on consoles). It’s handled incredibly well on the technical level, allowing you to really focus on the gameplay and minutiae of your park, instead of struggling against the controls.

Probably the biggest compromise you’re going to see on the Switch port is in the graphics. Switch owners are generally used to this by now, but it feels more noticeable in Jurassic World Evolution. It’s not that the graphics are necessarily bad, but everything just feels…blurry. Almost like you can never get close enough to get a crisp image of what you’re looking at.

It definitely takes some getting used to, but the benefit is I didn’t notice any stutters or slowdowns in the gameplay. Even on my recently upgraded computer, I still encountered slower frame rates and graphical stutters on the PC version of the game. Having such a smooth experience on the Switch felt worth the blurry downgrade, even if it’s a tad annoying and makes me less likely to share images of my creations online.