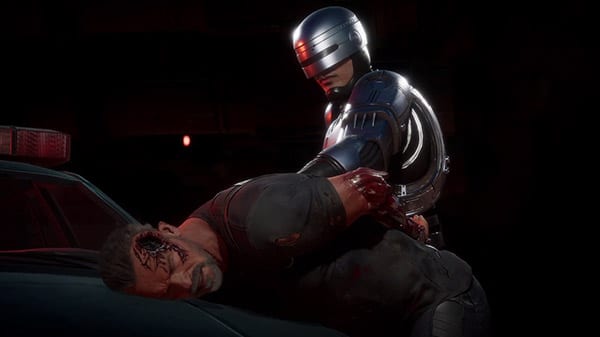 When the Mortal Kombat 11: Aftermath expansion launches on May 26, 2020, fighters will have the opportunity to play as Detroit’s favorite cyborg police officer, RoboCop. Today, NetherRealm Studios and Warner Bros. Interactive Entertainment released a new gameplay trailer pitting two of film’s most iconic cyborgs against each other.

It’s RoboCop vs The Terminator in all-out cybernetic warfare.

RoboCop in Mortal Kombat 11: Aftermath features the voice and likeness of actor Peter Weller, who portrayed the popular character in both the original “RoboCop” (1987) film and “RoboCop 2” (1990) sequel, while his opponent, the Terminator is based on actor Arnold Schwarzenegger’s character from the “Terminator: Dark Fate” film.

Players can pre-order Mortal Kombat 11: Aftermath now. Current owners of the expansion for $39.99 to receive the franchise-first story expansion, three new playable characters (Fujin, Sheeva and RoboCop), three character skin packs (incl. three skins each) to be released over time and the “Thanks a Million” Johnny Cage skin. Players can also preoder the Mortal Kombat 11: Aftermath + Kombat Pack Bundle for $49.99.