The man famous for owning the “rare” Blue Eyes White Dragon, and who often wagers his multi-million dollar company on a game of Duel Monsters, Seto Kaiba, is set to join Bandai Namco‘s massive anime crossover game, based on Shonen Jump characters, Jump Force in a matter of months.  That news comes from the publisher, themselves, when they took to twitter to announce his debut, along with a road map for the rest of the post-launch content.

A rival of choice for Yugi will join the fray soon in JUMP FORCE. Get ready to duel with Seto Kaiba in May 2019!
Discover also the update schedule until August 2019 including free updates and paid DLC.#unite2fight #jumpforce pic.twitter.com/aP6SwYCne6

The 2019 schedule of content release begins in April when Bandai Namco will unleash a free update that will include a Clan Feature, Vertex Event, and some swanky new Avatar costumes.  The Free Updates continue in May, as BN will release Online Link Missions, Raid Boss Event, and the iconic World Tournament Stage, a staple in the Dragon Ball series.  Some not-so free DLC will also release in May in the form of 3 new playable characters, Seto Kaiba, and 2 others yet-to-be-named.  The paid DLC will also include new costumes and skills, no doubt tailored to the 3 new characters.

June and July will see more Free Updates come to Jump Force with an Arena Event/New Costumes (June) and a Tournament Event/New Costumes (July).  It’s not until August that we’ll see another paid DLC release with 3 new characters and their accompanying costumes and skills.  August will also have a free update with New Avatar Costumes and a New Stage: Valley of the End.

This road map proves that Bandai Namco is committed to making Jump Force into a success, despite its disappointing start.  With new characters and new events on the horizon, they could salvage what still is a promising fighting game/anime crossover.  To read our initial thoughts on the game, check out our review.

As more Jump Force news releases, we’ll have it here on Cinelinx. 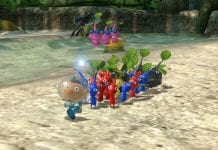 Pikmin 3 Deluxe to Launch on Nintendo Switch in October