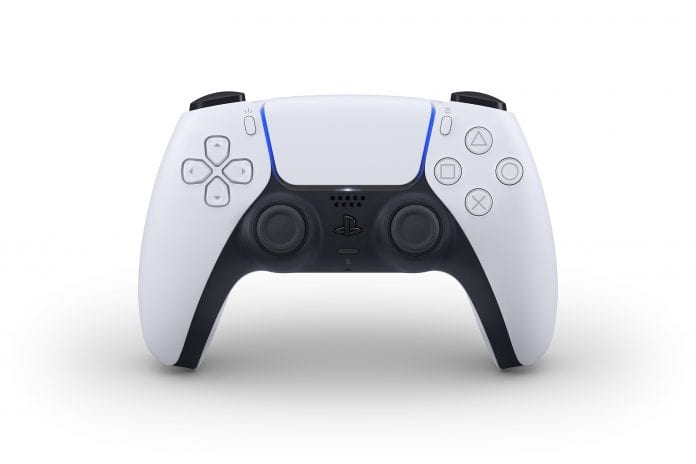 Eager gamers were given an unexpected surprise this afternoon as Sony officially revealed the controller for their next-generation console!

After getting a look at the PlayStation 5’s insides (and not much else) a few weeks ago, gamers have been anxious to see what the console itself would look like. While we still don’t know, Sony did reveal what their next controller, named the “DualSense” would look like: I’m digging it. It’s sleek and futuristic, while still incorporating many of the things I like about the current DualShock layout. I’m glad the light is no longer so prominent on the controller, and instead limited to the sides of the touchpad. It seems a tad “meatier” so hopefully it’ll feel great in the hands without being too bulky.

Of course the next-generation means new features coming with it, including haptic feedback and a built-in microphone so you can chat in game without the need for a headset: After thoughtful consideration, we decided to keep much of what gamers love about DualShock 4 intact, while also adding new functionality and refining the design. Based on our discussions with developers, we concluded that the sense of touch within gameplay, much like audio, hasn’t been a big focus for many games. We had a great opportunity with PS5 to innovate by offering game creators the ability to explore how they can heighten that feeling of immersion through our new controller. This is why we adopted haptic feedback, which adds a variety of powerful sensations you’ll feel when you play, such as the slow grittiness of driving a car through mud. We also incorporated adaptive triggers into the L2 and R2 buttons of DualSense so you can truly feel the tension of your actions, like when drawing a bow to shoot an arrow.

This provided us with an exciting challenge to design a new controller that builds off of the current generation, while taking into account the new features we were adding. For example, with adaptive triggers, we had to consider how the components would fit into the hardware, without giving it a bulky feeling. Our design team worked closely with our hardware engineers to place the triggers and actuators. The designers were then able to draw the lines of how the exterior of the controller would look and feel, with a challenge of making the controller feel smaller than it really looks. In the end, we changed the angle of the hand triggers and also made some subtle updates to the grip. We also took thoughtful consideration into ways to maintain a strong battery life for DualSense’s rechargeable battery, and to lessen the weight of the controller as much as possible as new features were added.

For the buttons, you’ll notice there is no longer a “Share” button as we had with DualShock 4. Don’t worry – it’s not going away. In fact, we’ve built upon the success of our industry-first Share button to bring you a new “Create” button feature. With Create, we’re once again pioneering new ways for players to create epic gameplay content to share with the world, or just to enjoy for themselves. We’ll have more details on this feature as we get closer to launch.

DualSense also adds a built-in microphone array, which will enable players to easily chat with friends without a headset – ideal for jumping into a quick conversation. But of course, if you are planning to chat for a longer period, it’s good to have that headset handy.

Again, I’m very much liking what I’m seeing here…but I would very much love to see the console itself too. I wonder if it too will incorporate the white/blue aesthetic or if we’ll have alternate color options at launch.