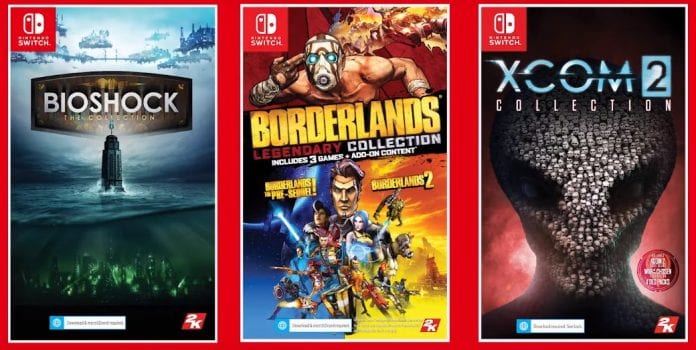 Unexpectedly a “mini” Nintendo Direct arrived this morning that announced a slew of new ports coming to the Switch and release dates!

Nintendo fans have been eagerly awaiting a new Nintendo Direct for quite some time now, and this morning brought one out of the blue! It was a “mini” Direct in that it didn’t bring any major reveals for the company’s first party titles (so no new Zelda or Mario info), but we did get some great reveals on some upcoming video game ports. Even better, quite a few are available starting TODAY.

2K Games has announced several of their classic titles are coming to the Nintendo Switch (a couple of which were rumored before) on May 29th. These include:

The XCOM 2 Collection (the base game, 4 DLC packs, and the Expansion)
The Borderlands Legendary Collection (the first two games and the Pre-Sequel)
Bioshock: The Collection (all three Bioshock games will also be available individually) EA will also be bringing Burnout Paradise Remastered to the Switch later this year:

Fully optimized and enhanced for the Nintendo Switch in 60 FPS, including pinch-and-pull map control for ease of navigation, Burnout Paradise Remastered transports players back into the world of Paradise City to tear it up in the ultimate driving playground online with friends or on-the-go. Alongside the original base game, players can also enjoy the eight add-on game packs released during the Year of Paradise, including the extension to the drivable world with Big Surf Island.

The unique, and bawdy, puzzle-adventure game, Catherine: Full Body (the recent remake of the original game) is coming to Nintendo Switch on July 7th. Star Wars fans have something REALLY special to look forward to as one of the best movie tie-in games ever, Episode 1 Racer, is coming to the Nintendo Switch later this year. Even better, it will support both split-screen multiplayer and LAN multiplayer.

On top of that, the previously announced port of Star Wars: Jedi Knight III – Jedi Academy is available…NOW. That’s right, you can download and play it right now. Speaking of games you can play NOW on the Nintendo Switch, the Panzer Dragoon Remake (announced during E3 last year) is up on the eShop as a timed-exclusive.

Which of these ports are you looking forward to playing most on your Switch?