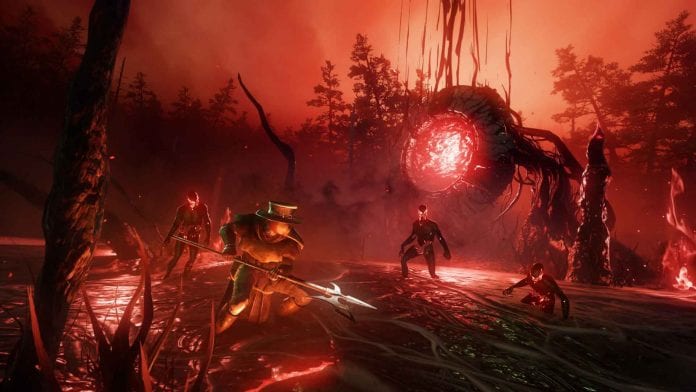 Amazon Games has released an update on their upcoming ambitious MMO, New World. The latest update, released on their blog, profiles the enemies players will be attempting to liberate Aeternum from, The Corrupted.

The Corrupted are at your doorstep. Breaches opening up, enemies crawling forth. How will you choose to engage? Sit behind your high walls until the Corrupted eventually invade? Or take the fight to them. Learn more here: https://t.co/GNDJa3g3UP pic.twitter.com/fLmA73yjdr

Similar to enemy fortresses found across landscapes in MMOs and adventure games, The Corrupted flood areas of Aeternum with creatures and structures, known as Corrupted Breaches. The blog post highlights each one you’ll uncover and attempt to destroy. Corrupted Monolith – A group of Corrupted Zealots have unearthed a towering, ancient monolith, empowering it to spread Corruption throughout the land Corrupted Portal – Corrupted Acolytes are opening a portal to bring forces of their army into the territory. Infested Grove – Corrupted Azoth has pooled under the earth, splitting the ground and giving rise to a twisted corrupted monstrosity. Escaping it’s tendrils will be a perilous endeavor. Festering Hive – A towering hive, formed from Corruption, has sprouted; birthing and empowering the corrupted beings that reside within it’s walls.

Pre-order for New World is available now at prices of $39.99 for Standard Edition and $49.99 for Deluxe. If you do pre-order, you’ll gain access to the Closed Beta in April. That’s a month before actual release on Steam in May 2020.