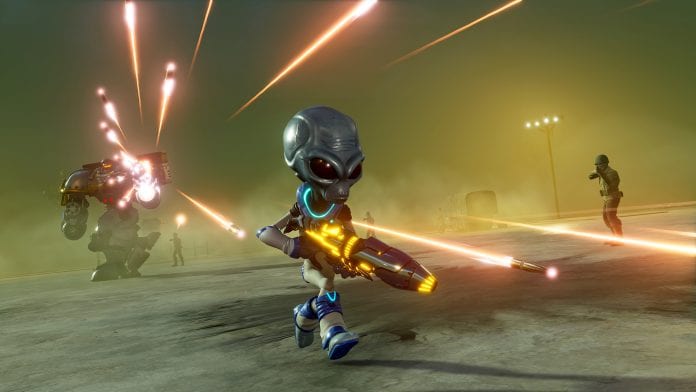 There are only so many games that I can say are cult classics to me and one of them is Destroy All Humans! When it first released in 2005, I had only been out of high school for about a month and was one of the first games I bought as an “adult”. I can remember spending many hours in this world, flying over and obducting cattle, disguising my self a human just to easily terrorize the town, or just running around vaporize all in my path.

In today’s trailer, we see the opposite of a July 4th celebration as Crypto destroys all things patriotic, even taking down the White House in a move right out of the film Independence Day. This is what I love about this game and why I’m so glad THQ Nordic brought it back to life, not destroying patriotism, but then having the ability to run rampant and destroy whatever you want.

As we get closer to launch and you should all know that I cant wait to playing and destroy this world all over again on July 28th! Check back soon for more news on this game and to see my walkthrough gameplay of the original in the next week!

The cult-classic returns and invades everything but your privacy on July 28, 2020! Terrorize the people of 1950s Earth in the role of the evil alien Crypto-137. Harvest DNA and bring down the US government in the remake of the legendary alien invasion action-adventure. Annihilate puny humans using an assortment of alien weaponry and psychic abilities. Reduce their cities to rubble with your flying Saucer!

One giant step on mankind!

Destroy All Humans! is a cult classic and one of the few games that will have you laughing out loud. Many games have taken inspiration from its mix of humoristic story-telling and easily accessible open-world shooter action, as well as its wide range of over-the-top weaponry. But there can only be one Cryptosporidium: the human-hating alien with the voice of an angry Jack Nicholson and a shorter fuse than a xenomorph on steroids.

Step right up and enjoy the show!

Only Destroy All Humans! allows you to explore idyllic US cities of the 1950s, read the thoughts of their citizens to uncover their secret desires… and then burn the very same cities to the ground with the mighty Death Ray of your flying saucer!