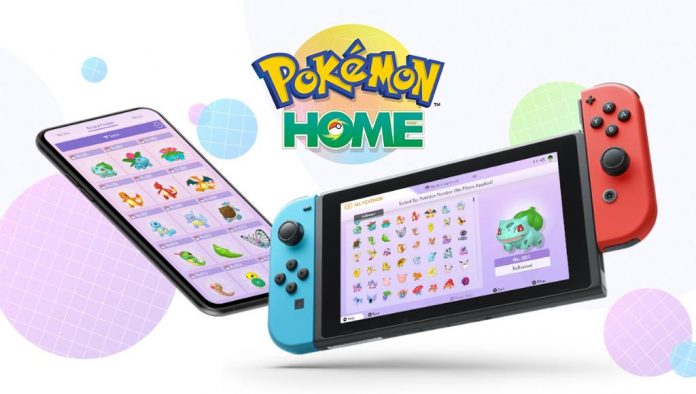 The mobile app can be found in the Apple App Store and on Google Play.

Pokémon HOME is a cloud-based service for Nintendo Switch and mobile devices that allows trainers to move, store and trade Pokémon between game titles as well as stay up to date with Pokémon news, accumulate HOME points to be turned into Battle Points, and register Pokémon to the HOME National Pokédex.

According to the official website, Pokémon deposited into HOME will be registered into the Pokédex. In the National Pokédex, trainers will be able to view all entries from different games in the franchise as well as their abilities and moves they can learn.

The service offers two types of plans: basic and premium.

The basic plan is free and offers a smaller number of features compared to the paid plan. The premium plan most notably includes the ability to move Pokémon from the Pokémon Bank, the Nintendo 3DS cloud-based storage service. Once a Pokémon is moved from Pokémon Bank into HOME, it cannot be moved back into the Bank. According to the Pokémon website, the Switch version of HOME will be compatible with Pokémon Sword and Shield and the Let’s Go! Pokémon titles. Both the Switch and mobile device version will allow connectivity with Pokémon Bank, and future support for the mobile game Pokémon Go! is planned for the future.

Pokémon moved from either of the Let’s Go! titles to Sword or Shield will not be eligible to be moved back into the Pokémon games, but Pokémon can move freely between the Let’s Go! games with no issue, according to the official website.

Players will have the opportunity to trade Pokémon at anytime using HOME on their mobile device.

Trainers will have a plethora of trading opportunities to choose from in HOME between Wonder Box, GTS, Room Trade and Friend Trade.

Place Pokémon in your Wonder Box to trade off to people around the world — even when you are offline.

Trainers can use GTS to specify which Pokémon they are searching for and what Pokémon they would be willing to trade with, matching with Trainers who meet your criteria. Trainers will also be able to request Pokémon they haven’t registered in Pokemon HOME‘s National Pokedex.

Trainers can use Room Trade to create a trading space with up to 20 other trainers. The website says that trainers won’t know which Pokémon they will be receiving from their Room Trade, so this reads like a small-scale Wonder Trade to me. All trainers will be able to participate in Room Trades but only players using the premium plan will have the ability to create them.

Friend Trade simply allows you to trade with trainers you have become friend with on Pokémon HOME. The Pokémon Company noted that this and any feature related to adding and managing friends cannot be used by users under the age of 16.

Premium plan players will have access to the Judge function in HOME, allowing trainers to check the strength of their Pokémon.

Mystery Gifts are coming to the mobile version of HOME, allowing trainers to receive Mystery Gifts for Sword and Shield in addition to gift meant specifically for HOME.

Trainers using HOME will have a “room,” essentially a profile that includes stickers you have collected through HOME challenges and information about events or data you’ve connected to the app. (Though, I would love a secret base style “room” that I can decorate with items I have earned/collected… but I digress)

Following the February 2020 launch of HOME, the mobile version of the app will be updated to include the Battle Data feature, where information and Pokémon rankings from Ranked Battles and other online competitions in Sword and Shield will be accessible.