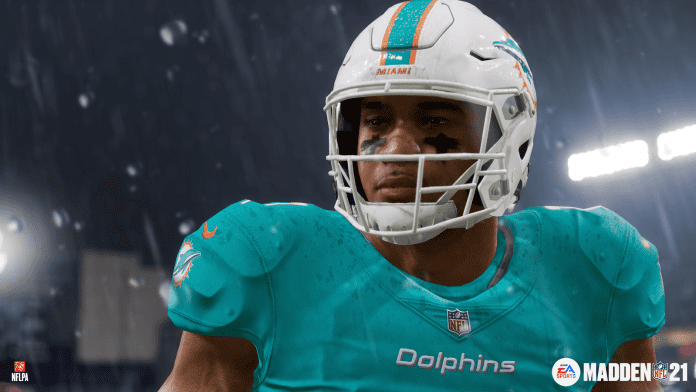 This week, EA Sports made the monumental announcement that the innovative NFL player-tracking technology known as Next Gen Stats will finally be integrated into Madden for Next Gen Consoles. What makes this announcement so groundbreaking is how the data compiled from Next Gen Stats will make the game more realistic than ever before. See it for yourself in the trailer below:

The trailer provides a great preview for what we can expect when the Next Gen Madden NFL 21 launches on December 4, 2020 for PlayStation 5 and Xbox Series X/S. However, there’s a lot more exciting details in store that didn’t quite make the Gameplay Trailer.

Thanks to EA Sports, we were able to sit in on a preview for the next-gen Madden NFL 21, and we were absolutely blown away by what was revealed. Joining the preview were Seann Graddy, Executive Producer of Madden NFL 21,Connor Dougan Creative Director, and Clint Oldenburg Producer Madden NFL Gameplay. Together, they explained everything coming to next gen Madden in great detail, throughout the preview. The preview, itself, was broken up into three different parts: Play Next Level, See Next Level, and Move Next Level, and we did just that.

In Play Next Level, the team talked about how Madden NFL 21 will capitalize on the power of Gen 5 consoles to improve the overall Madden experience. This will include things like Blazing Fast Load Times, Location-Based Audio, and even taking advantage of Controller Haptics and Adaptive Triggers. The utilization of Controller Haptics and this new Trigger technology is especially exciting as players now get to feel the Madden experience running the ball, tackling players, kicking a game-winning field goal, etc. As for Location-Based Audio, Madden NFL 21 will now include audio from some of the NFL’s most iconic stadiums and crowds.

See Next Level is where we really got to see the difference between Gen 4 Madden and Gen 5 Madden. Utilizing next gen lighting, EA Sports is able to capture more authentic facial features and stadium environments. However, the even more exciting additions have to do with the new, authentic body types and the next gen weather system.

One of the coolest parts of the Next Gen preview was getting to see the Next Gen Weather System. PS5 and XSX players are in for something special as the Next Gen Weather system will see snow piling up on sidelines and stadiums and puddles forming in Stormy Weather. The team did admit that it shouldn’t have a direct effect on gameplay, yet, but that it’s something they are exploring.

As for body types, EA Sports wanted to capture the detail of NFL body types for next gen systems. Therefore, they made 6 archetypes, including Ripped, Lean, and Soft. A really awesome part of this is how each archetype will have a direct affect on how that player plays the game. For instance, a heavier skill player will tend to fall forward and even initiate contact. Whereas, a leaner, slighter player will do everything in their power to avoid hits.

Next Gen Stats had a big part to play in the last section of the preview, Move Next Level. This was actually my favorite part of the whole preview, as it showed just how much time and effort the EA Sports team has been putting into updating the overall feel and authenticity of Madden NFL 21. It’s safe to say they achieved that thanks to Next Gen Stats.

With real-life data tracked by Next Gen Stats, EA Sports seemingly rebuilt the gameplay of Madden NFL 21 from the ground up to create a far more authentic experience than ever had in a Madden game thus far.

One of the most impressive parts was when they showed the process of using Next Gen Stats by using an actual route ran in the Super Bowl by Los Angeles Rams Wide Receiver Robert Woods. The Next Gen Stats showed that on Woods’ deep drag route he rounded corners, rather than making a stiff cut. This allowed him to continue his route progression using the same speed and get in a great position to catch the ball.

Curvy routes like his will be a new normal in Madden NFL 21, as the team has made it a point to use Next Gen Stats to do away with the robotic approach we’ve had since forever. Part of that will also include more authentic speed off the line and when the ball is in the air. Currently, players just burst off the line at full speed, but that isn’t how things always are in a real game. Specific plays dictate varying levels of speed and EA Sports intends on matching that in Madden NFL 21. Although, admittedly I am concerned about the feel of a slower Madden, but the team ensured it would feel more precise and accurate.

The effect of Next Gen Stats won’t be solely limited to offense, either. Next Gen Stats will capture the exact way in which real-life defenders approach the ball, which will likely lead to more batted balls, break-ups, sacks, and picks.

One new element coming to next gen Madden NFL 21 that I love has to do with plays, bookmarking them and the ability to pick plays designed for getting the ball in the hands of a specific player. It’s something that’s been a need for a long time and it’s awesome that PS5 and XSX players will be able to take advantage of that.

However, one thing I’m not a fan of has to do with Cross-Gen capability. During a Q&A session, I asked if Gen 4 players would be able to play against Gen 5 players. Unfortunately, the answer was no. You can still move your existing franchises from Gen 4 to Gen 5 for one time only, but that’s about it. While it is understandable that Cross-Gen may not be feasible with this new and improved Madden, it does leave anyone that is in your league that doesn’t have a next-gen console out in the cold, which is a major bummer.

One of the clear takeaways from the preview was how this is all just the beginning for Madden on next gen consoles. EA Sports is exploring a ton of innovative ways to improve gameplay and make the overall Madden experience a more authentic video game, utilizing both the power of next gen consoles and the real-life data captured on the gridiron.

It all starts with the really cool innovations included in the Gen 5 Madden NFL 21 launching on December 4, 2020 for PlayStation 5 and Xbox Series X/S.