The next chapter in the Wolfenstein story will see the Blazkowicz twins on a dangerous mission to find their father BJ, in Wolfenstein Youngblood. If the new trailer is any indication (which it is), there’s gonna be lots of dead nazis!  Watch the trailer here…

Next month, Wolfenstein Youngblood makes its debut on all consoles and PC.  Before Bethesda’s E3 2019 Presentation, you may not have seen much for the sequel to Wolfenstein II: The New Colossus, but this latest trailer was more than enough to get even the most skeptical gamer excited.

This is Wolfenstein Youngblood.

Rid Paris of its Nazi problem together with a friend in Wolfenstein: Youngblood, the first co-op game in the series’s history. Set in a twisted 1980, step into the power armor of the “Terror Twins,” Jess and Soph Blazkowicz, on a mission to find your missing father BJ.

Wolfenstein Youngblood will be playable as either a co-op or solo experience starting July 26, 2019 on PC, PlayStation 4, Xbox One, and Nintendo Switch.

Gamers who pre-order the Deluxe Edition will be able to invite a friend to play free with the Buddy Pass!  Plus, it includes the Cyborg Skin Pack to customize your power armor and weapons. As a bonus, players who pre-order will also receive the Legacy Pack, iconic skins inspired by BJ’s earlier adventures! 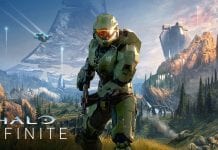