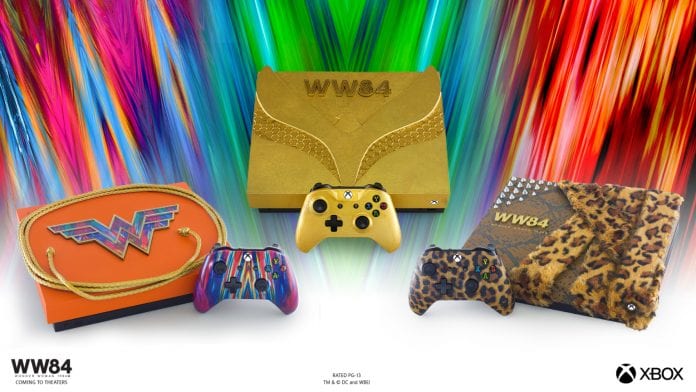 Microsoft revealed three custom, one of a kind, Xbox One X consoles inspired by the upcoming Wonder Woman 1984 film.

The consoles are apparently for decorative-use only, but they are definitely worth displaying on the mantel (or wherever you choose to display your gaming goodies). Winners will also receive a standard Xbox One X console.

“To celebrate the highly anticipated release of Wonder Woman 1984, Xbox is giving movie buffs and gamers alike the chance to own a piece of Wonder Woman lore. Inspired by the iconic armor and outfits worn by the powerful female leads of the movie comes three custom consoles like you’ve never seen them before,” Microsoft announced in a blog post today. “This console was made entirely by hand features a sophisticated golden eagle crest and 3D printed Wonder Woman 1984 logo resting above it. The best part? This gold console will be auctioned off with all proceeds going to Together for Her, an initiative launched by the Charlize Theron Africa Outreach Project, leading humanitarian organization CARE, and the Entertainment Industry Foundation to stand in solidarity with women and girls around the world deploying funds and supporting the global response against domestic violence during the time of COVID-19.” Next up is the Wonder Woman Lasso of Truth Xbox One X Console. The Lasso of Truth console is available to win via sweepstakes entry by liking or retweeting the official entry Tweet below.

“Inspired by the one wielded by Wonder Woman herself in the movie, this braided lasso lays perfectly across the top of the console and encircles a beautiful 3D printed Wonder Woman logo bursting with the vibrant colors of the 1980s.”

RT this post for a chance to win a custom Xbox One X display inspired by WONDER WOMAN 1984, coming to theaters. Experience the wonder. #WW1984Xbox #WW84 #Sweepstakes

And finally, the Barbara Minerva Xbox One X Console. “Inspired by the punk rock look of Wonder Woman’s archenemy, this custom console boasts an intricate snakeskin pattern and faux leopard fur for a truly wild appearance. The silver spikes on the top and front of the console and gold Wonder Woman 1984 logo were 3D printed to exactly match the size of the console.”

Microsoft left out the details on how to win the third console at the time this article was written. Perhaps we will learn more soon.

Microsoft also announced that Roblox players can experience an immersive new experience for Xbox One, journeying to Themyscira to unlock an epic collection of avatar items featuring some of Diana’s most quintessential gear, outfits, accessories and more.

Wonder Woman 1984 will hit the big screen on October 2.