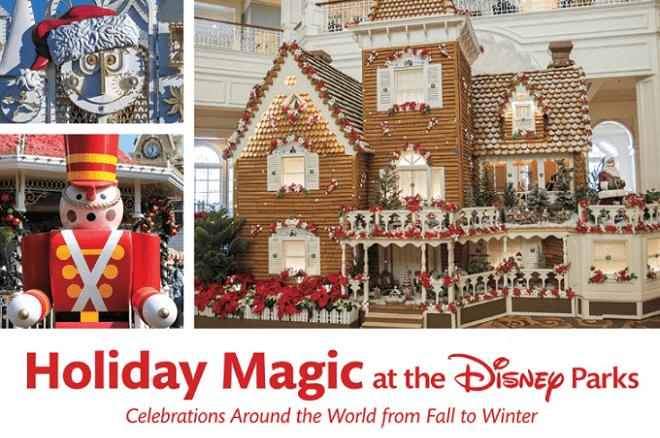 Celebrate the holidays with Disney Parks and these six amazing books that will whisk you away to the Magical Kingdom from the safety of your own home!

While it was clearly the right decision to temporarily close up shop, the Disney theme parks are a source of joy and happiness that millions of visitors around the world experience each year. For many of us, not being able to visit a Disney Park in person was definitely one of the many low lights from a year which seemed to excel at them.

Well, Disney Publishing Worldwide is trying to ease some of that pain with these six amazing titles that will make the perfect Christmas gift for the Disney fan in your family or circle of friends! From monorails, to recipes, to fashion, to the man himself, there’s something for just about everybody.

Check them out and look down below for a chance to win an amazing prize pack! THE DISNEY MONORAIL: IMAGINEERING A HIGHWAY IN THE SKY

Walt Disney is renowned as a cartoonist, filmmaker, showman, and entertainment icon. But he was also a farsighted futurist, a transportation buff with practical roots in the past, and visionary sights set on the future. In imagining Disneyland, Walt saw it not only as a destination for diversion and entertainment, but also as a means of presenting practical demonstration of new ideas and new technology with real-world applications.

In the Disney Monorail: Imagineering a Highway in the Sky, readers will discover the parallel stories of the development of a new form of transportation and the evolution of Walt’s prophetic creative mind, which together resulted in the first daily operating monorail in the Western Hemisphere. Since June 1959, this mid-century modern marvel has captured the hearts and imaginations of theme park and Disney fans everywhere; it has inspired, as Walt hoped, the creation of working monorails in practical transit application in varied locations all around the world.

Through a lively and succinct narrative and a stunning collection of unique historical photographs and rare concept and development art (much of it never before published) readers will be transported into a future where yesterday’s dreams are tomorrow’s realities.

To order a copy of Disney Monorail: Imagineering a Highway in the Sky, click HERE! The kitchen is a great place to make memories. And Disney Eats will inspire you to prepare food that’s not just fun but also tasty. From Healthy snacks like a Minnie Mouse-inspired crudité platter and savory dinners such as Mulan’s Blossom Stir-Fry to Disney character-themed bento box lunches and easy-prep treats such as Frozen Banana Dalmatian Pops, author Joy Howard show that the creative possibilities are endless. With an instruction by beloved baker Joy Wilson and more than 150 dynamic full-color photographs, Disney Eats will not only spark more delight in the kitchen, it will also lead to more memorable and creative success in your cooking.

To order a copy of Disney Eats, click HERE! “What would Rapunzel wear if she was a real girl?” This is the question that launched author and influencer Leslie Kay’s first look on her DisneyBound blog. Within days of sharing the look to her 300+ social media followers, she began getting more and more requests for Disney-inspired looks. Her blog grew to over 30,000 followers within three weeks, and eight years later, her community of Disney-bounders is now over half a million strong.

This book walks readers through every step of the Disney-bounding process, from choosing the outfit using items in your closet or from the local mall, to pushing Bounders beyond their comfort zone, to spreading good vibes. It also shows Disney fans and beyond that Disney-bounding is not just about playing dress up–it’s about community, about finding who you are, and expressing it through the intersection of Disney and fashion

At the end of this book, readers will be left feeling inspired, empowered and ready to start a new Disney-bounding fashion adventure!

To order a copy of Disney Bound, click HERE! ONE DAY AT DISNEY

Discover what it’s like to report to work every day for The Walt Disney Company. Step behind the scenes to immerse yourself in one “ordinary” day at Disney. In addition to the book, the Disney+ team was on hand to capture stories along the way. A full-length documentary and 52 short-form episodes expand the profiles and delve deeper into the essence of what it’s like to be a Disney cast member.

On a Thursday in 2019, a small army of photographers and videographers scattered across the globe to capture what goes on beyond those tantalizing “Cast Members Only” doors – whether eavesdropping on historic endeavors or typical tasks. All the photos in this book were taken on that single Thursday, beginning early in Tokyo and following the sun around the world through Shanghai, Hong Kong, Paris, Madrid, the Bahamas, Costa Rica, and dozens of places throughout the United States. More than 40 hours after it began, the day ended as the sun set on the Aulani resort in Hawaii.

On that day, some 80 Cast Members agreed to open up their workshops, dressing rooms, kitchens, cubicles, TV studios, labs, locomotive engines – and some even more surprising and diverse work spaces. They also shared their stories: childhood dreams and chapters, career pivots and triumphs, workaday hurdles and joys. It was just a day in the life, as extraordinary as any other day at Disney. As any cast member can tell you, a Disney job is less a destination than a limitless journey. And for just One Day at Disney, we can all tag along for the ride.

To order a copy of One Day at Disney, click HERE! HOLIDAY MAGIC AT THE DISNEY PARKS

This deluxe jacketed hardcover is visual storytelling at its best. Almost 1,900 photographs (two-thirds of them taken just for this book) showcase Disney’s key locations filled with special holiday menu offerings, the biggest parade and stage productions and nighttime spectacles, the tiniest decorating details from amazing artists and designers, and, of course, the most significant historical holiday events.

A harmonic trio of researchers, writers, and photographers logged more than 180,000 miles visiting every Disney park and resort across the globe, personally documenting the holiday installations through eighty thousand photographs and, wherever possible, meeting the talented and endlessly passionate artisans behind it all.

With twelve theme parks and dozens of resort hotels, plus numerous cruise ships, dining and shopping districts, and more than six decades of holiday experiences, there are a lot of pumpkin treatments and ornate trees to reflect upon. (The smallest holiday tree at a Disney property is just four inches high, while the very tallest reaches up to seventy feet.) Every parade or show requires dozens (sometimes hundreds) of creative magicians both onstage and off. And each decoration is chosen carefully to fit within a story and is expertly placed on its tree or garland by craftspeople backstage. The decor is installed onstage, maintained, and, ultimately, disassembled by technicians before it is once again cleaned, prepared, and stored in vast warehouses . . . till next year’s event.
The stories and contributions from so many unsung cast members (often hard at work at hours of the night when others are asleep) fill these pages, along with the joys of Halloween, Christmas, Hanukkah, and New Year celebrations. Time to join the party!

To order a copy of Holiday Magic at the Disney Parks, click HERE! Gorgeous never-before-published photographs and fascinating personal memories celebrate the half-a-century career of Disney Legend Ub Iwerks, a self-taught animator who became the first to animate Mickey and Minnie Mouse and an exceptional draftsman, prolific innovator, and all-around technical genius who directly collaborated with Walt Disney to create some of the most loved moments throughout film and theme parks.

Even before the creation of Mickey, Walt established a reputation as a technical leader in Hollywood and frequently relied on the counsel, expertise, ingenuity, and creativity of a kindred spirit, lifelong friend, and fellow virtuoso: Ub Iwerks. Up till now, Ub and his many technical inventions and techniques have been largely unknown by the general public. His illustrious career consisted of dozens of innovative contributions, large and small, to both animated and live-action motion pictures, as well as the fields of optics, film processes, and special effects. He was also the major force behind the design of special cameras, projectors, electronics, and audio for theme park projects, and much more.

The high standard set by Walt and Ub continues to inspire artists and technicians within The Walt Disney Company as they explore new avenues of quality entertainment. Here is a one-of-a-kind appreciation to an extraordinary man and an outstanding career, a record of his many inventions and accomplishments, and a tribute from a grateful son to his remarkable father. Thanks to our friends at Disney Books, we’ve got a prize bundle containing a copy of four of the books above to give away! That’s right, you could win The Disney Monorail, Disney Eats, Disney Bound, and Walt Disney’s Ultimate Inventor all in one shot!

How can you win? Simple.

All you have to do is follow us on Twitter, and QUOTE RT or REPLY TO THIS TWEET and tell us your favorite Disney animated film…that’s it!

After that we’ll pick a winner at random and contact them for shipping information!

Good luck everyone and be safe!

*This contest is open to U.S. residents only.