Did you know I love Transformers, of course you did, let’s move on. Hasbro has been giving us some great Masterpiece G1 figures lately and like all toylines based off a series there’s only so far they can go on characters. While I believe there are a ton more characters from the original series I get how that line may only apply to a certain collector. Now we’ve seen the Masterpiece line move to making figures from the popular Beast Wars series but now we have our first offering from the live action movies. MPM-4 will be the live action version of Optimus Prime from the first three movies. Complete with interchangeable faces for masked and unmasked, poseable fingers, and die cast parts.

Okay here’s where as a fan and collector though I need to tell some truth. Does this figure look good, absolutely. The paint is so very good and accurate with the right amount of shine and clean lines that make me go WOOOOO!. I can see some good joint in there that look like he’s going to be highly poseable and with two swords and his Ion Blaster it looks like this figure has all it needs. Now here’s the bad part and I have several Movie Optimus molds and the one that was released with Revenge of the Fallen was one of the best. It’s been reused several times and there are some great upgrade kits out there that make it an excellent figure. This figure carries a $99.99 price tag as well which in Masterpiece pricing isn’t bad. I must note one more thing. These press images show me a figure that has some stuff hanging off the back that may just be mistransformed. Also the stacks are short in the truck mode but that also may be because of mistransformation. Come on guys if you’re trying to sell me something at this price point give me some decent images.

Look for this figure as we celebrate the 10th anniversary of the live action movie universe this Summer. 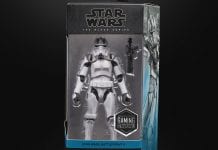