There were more than a handful of Bat-fanatics very upset when the series was canceled after three seasons. It’s obvious the show had a huge following as it’s been in syndication and airing somewhere in the world every day for the past 45 years. DC Comics is giving fans of the series something to get excited about. They’ve launched a new online and monthly print comic book continuing the campy adventures of Adam West and Burt Ward’s portrayals of the superheroes with Batman ’66.

Batman ’66 picks up right where the series ended in 1968. Robin the Boy Wonder is still astonished at his mentor’s genius and cunning crime solving. Our hero can’t go into a night club without being asked by someone to teach them the Batusi. The Riddler still can’t resist a good brain-teaser and Catwoman just plain can’t resist Batman. All the wacky and colorful thrills and chills of television’s “Batman” is found in this new title.

Writer Jeff Parker does an incredible job capturing the flavor of the original show in Batman ’66. You really do feel like you’re watching an episode as you move through the panels of the book. You can hear Adam West and Burt Ward’s distinguishable voices every time you read one of the word bubbles. Parker perfectly captures the personalities of Frank Gorshin’s Riddler and Julie Newmar’s Catwoman as well.

Artist Jonathan Case commandeers the look and feel of the Batman series just as well as Jeff Parker writes it. For the most part, his attention to detail on the characters is on the mark. However, a few characters really don’t resemble their onscreen counterparts. Alfred is a bit too thick in the face and is missing his glasses. Commissioner Gordon wears glasses all the time when he only occasionally wore them in the show. Aunt Harriet has blond hair in the comic book versus red in the series. Batman, Robin, Chief O’Hara, Riddler, and Catwoman are virtually spot-on in appearance.

The coloring for Batman ’66 is provided by Case as well. The color scheme was an integral part of the atmosphere of the original show and he nails it in the comic. The vibrant colors of the character’s outfits and their surroundings pop off the page. I also love the spotty layers which add a retro feel to the book. In addition, each page has a 3D-style of outlining that gives the illustrations extra depth.

Batman ’66 truly does bring back the fun and camp of the original TV series. If Jeff Parker and Jonathan Case can keep up this quality of work and maybe make a few minor adjustments to a few of the characters’ visual appearances, this title could keep going for years. It would be interesting to see some of the 1970s-and-beyond villains in Batman canon make appearances. Could you imagine Anarky, Azrael, Professor Pyg, or Ra’s al Ghul turning up in this zany world?

Batman ’66 is available now in print or for Kindle. 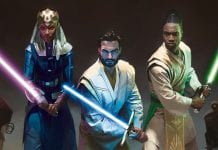