In this special Halloween episode of Everything is Canon, Steve is joined by co-host Jessica Salafia Ward (LaughingPlace.com) as they speak with Disney Chills author Jennifer Brody aka Vera Strange!

Disney Chills is a middle-grade horror series in the vein of Goosebumps, written by Jennifer Brody under the pen name Vera Strange. Each book in the series focuses on a child making an unfortunate deal with a Disney Villain, such as Ursula, Dr. Facilier, or Captain Hook, and the terrible price they pay for having their wishes granted. The books also feature moral lessons on popularity, growing up, and other social issues kids face.

The three of them discuss many spooky things including their favorite villains, their favorite horror films, and of course what it takes to write a chilling series like Disney Chills!

Here’s a list of the films that were referenced should you choose venture to the dark side, but just in case, better keep the lights on!

Everything Is Canon: Halloween Special
Everything is Canon 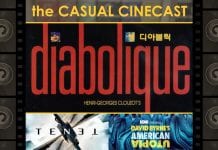