DC Comics releases the first five print issues of Batman ’66 for fans of the psychedelic and campy romp we all grew up with. I specifically remember watching the series at my babysitter’s house after school every chance I could get. If you prefer your Caped Crusader a little less gloomy and a little more fun, this collection will thrill you.

The first five issues included in Batman ’66 Volume 1 features the Riddler, Egghead, Chandell, the Joker, the Penguin, the Mad Hatter, the Clock King, the Sandman, Mr. Freeze, and two different Catwomen all clashing with the Dynamic Duo as they protect the citizens of Gotham City from the rogues’ zany crime sprees. Batgirl even gets in on the action when Batman and Robin are out of town fighting evil in Japan.

Jeff Parker handles all the writing for Batman ’66 Volume 1. He does a bang-up (pun intended) job of adapting the vibe and wackiness of the TV series in comic book form. You can totally imagine Adam West, Burt Ward, or any of the other actors voicing their characters seen on the page. Parker doesn’t skip a beat when it comes to bringing the swinging 60’s exploits of the Caped Crusader and his boy sidekick to life.

A long list of artists worked on the illustrations for Batman ’66 Volume 1. Jonathan Case, Ty Templeton, Joe Quinones, Sandy Jarrell, Reuben Procopio, and Colleen Coover all provided their unique talents for the graphic novel collection. Some of the characters look like their acting counterparts at times, while at others they don’t. My favorite visual interpretation is of Cesar Romero’s Joker. Romero refused to shave his mustache for the show, so he would just paint over it with white makeup. The comic books show his mustache clearly painted over, just like you could see it in the original series.

Batman ’66 Volume 1 includes some fun extras. There are several variant covers featured at the back of the book. They were drawn by Jonathan Case, Kevin Maguire, Cully Hamner, Chris Sprouse, Karl Story, and Dave Johnson. The San Diego Comic-Con action figure variant cover for issue #1 is found in here as well.

If you long for more of Adam West and Burt Ward’s take on the Dynamic Duo, Batman ’66 Volume 1 will fill that void. It’s like holding five new episodes in your hand for you to devour. Writer Jeff Parker, all the book’s artists, and colorists completely capture the essence of the television show. Throw your limited edition “Batman” Exclusive Original Television Soundtrack Album into your stereo, sit back on the couch, and get ready to go back in time to the hip and psychedelic era of Gotham City. 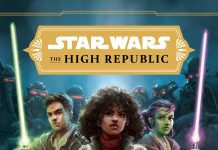