This October, a new Marvel Star Wars comic series from Daniel José Older will arrive, which follows an unlikely pair as they look to solve a strange and deadly mystery set in The High Republic era.

In Star Wars: The High Republic: Trail Of Shadows, with art from David Wachter, colors by Giada Marchisio, and cover art from David López, Daniel José Older will introduce the mystery fiction genre into the new era of Star Wars storytelling. “We’re exploring a new corner of The High Republic with Trail of Shadows, in which we get to see another side of the Jedi and the Republic.” Michael Siglain, Lucasfilm Publishing creative director, told Kristen Baver over at Star Wars dot com. You can read the full article HERE.

The noir-style mystery will unfold after the shocking events of the Republic Fair and introduce new key HIGH REPUBLIC players such as Sian Holt and Jedi Emerick Caphtor, two detectives tasked with uncovering the source of a strange new threat that could bring darkness to the Jedi Order’s golden age. The story will directly tie into the events of other HIGH REPUBLIC sagas, including the upcoming new Cavan Scott novel The Rising Storm.

As for the story, the series will take place after the shocking events of the Republic Fair, and the Council call upon Jedi Emerick Caphtor to investigate a strange mystery with ties to the Jedi Order. At the same time, Chancellor Lina Soh calls upon Sian Holt, a high-end, in-demand private detective to look into the same mystery. Crossing paths, it’s clear these two will have to overcome their differences and work together.

There are so many weird and terrifying threads to unravel here, and David Wachter’s excellent art fits the mood, urgency, and depth of this story perfectly. I am beyond excited to be working on this thrilling, creepy, delightful story.

With comparisons to and drawing inspiration from The X-Files duo Fox Mulder and Dana Scully, the characters of Emerick and Sian look to have the famous buddy cop chemistry that should provide a ton of levity and passion to their work. As always, they are all fairly tight-lipped when it comes to story details, but as far as the timeline is concerned, the story will connect directly with the new The High Republic: The Rising Storm, the new Cavan Scott novel.

The series will kick-off this October, in the meantime, check out some of David Wachter’s character sketches below of the story’s leads, Emerick Caphtor and Sian Holt! 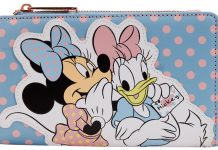