It’s another episode of It Is What It Is, and B.C. is talking to Trey Mack of the Offshoots Radio Network

This week on IiWiIJA, B.C. joined by Trey Mack! Head honcho from the Offshoots Radio Network! Trey bring a major announcement about the Offshoots, along with a great conversation! The guys talk everything from movies, to wrestling, to podcasting, to Carl Knight selling T-Shirts! All this, Box Office Predictions, and more on this episode of It Is What It Is, with The Jackass!

The Movie Trivia Schmoedown is coming to Houston! To Booker T’s World Gym Arena! It’s Ben “The Boss” Bateman Vs “Dastardly Andrew Ghai! Get tickets TheSchmoedownLive.Com! Bring a “We want the Jackass in the Schmoedown” or “Dallas Schmoedown” Sign, or something of that nature and get a special Give Away from BC himself! 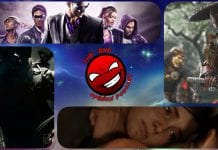 It Is What It Is, with The Jackass! Episode 245: Bringing The Hood To You