It’s another episode of It Is What It Is, and B.C. is talking TO EVERYONE ABOUT THE 200TH EPISODE!!!!!

This week on IiWiIJA, B.C. has hit 200 episodes! And to celebrate he has an extra, EXTRA long episode with so many guests! From Alita Battle Angel and All Way Bent, Chris Lemchi, The Rabid Emperors heroic leader, and brother to BC, Nigel Rabid! The Metalhead Manic makes his IIWIIJA debut, it’s SLEDGE! Rob nTropi calls in to talk TV. And then, in the final segment, Kristopher Haiden, Carion Arcane, and Anthony Marticcio all sit down with BC to talk stories! It is a jammed pact nearly 3 hour episode! So strap in, for all this, Box Office Predictions, and more on this episode of It Is What It Is, with The Jackass! 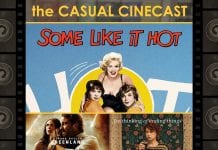