Issue #1 introduces the new incarnation of the Secret Six. The group consists of Thomas Blake aka Catman, Damon Wells aka Big Shot, Kani aka Porcelain, Shauna Belzer aka Ventriloquist, Strix, and Black Alice. All are equipped with certain “talents” they can use for good or evil. Can they band together to save themselves from a lethal prison before one of them is terminated?

Gail Simone does a great job introducing all of the main characters for Secret Six. Each personality shares their power and name in a natural manner that doesn’t feel forced. The mystery of who is holding them hostage and how they can escape keeps readers engaged to the very last page.

Ken Lashley’s artwork stands out from his peers as something all his own. His style isn’t as precise as Jim Lee or Ivan Reis. Facial and body contours are textured through the use of Lashley’s skilled lines. All his illustrations are inked by Drew Geraci and himself with brilliant coloring by Jason Wright.

Secret Six #1 is rated T+ for Teen Plus. It features violence, gore, frightening and intense sequences, and profanity. Some of the illustrations rival scenes you would see in horror or graphic gangster films.

Relaunching old titles with new members, storylines, and updated origins is nothing new for DC Comics. They’ve been re-creating themselves every decade or so for as long as anyone can remember. Secret Six #1 excels at establishing a new set of oddballs ready to fight whoever or whatever gets in their ways.

Secret Six #1 is available now in print and Kindle editions.

It Is What It Is with The Jackass! Episode 233: Saying Goodbye To The FJA Part II 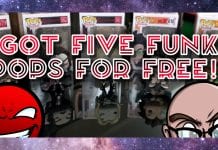