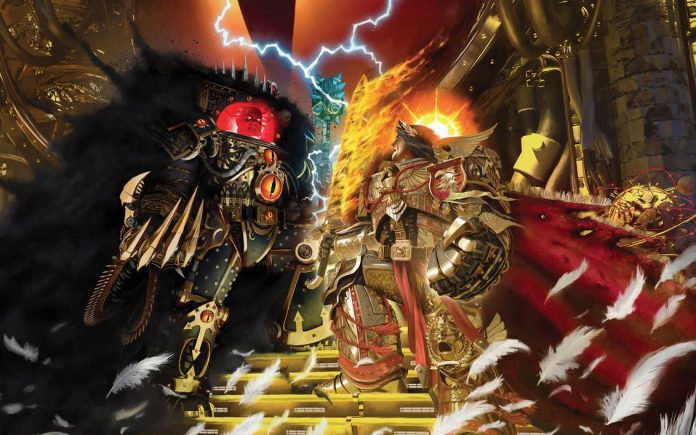 Starting life as an expansion of the Warhammer 40,000 universe, the tale of the Horus Heresy has grown vastly since its inception in 1987.

DISCLAIMER: This article details key plot points within the Horus Heresy and as such may contain spoilers.

If you were to contemplate the most prolific novel series of all time, you might consider the eccentric tales of Terry Pratchett’s Discworld or Stephen King’s Dark Tower multiverse. Perhaps the collected high fantasy works of Tolkein or Robert Jordan’s epic Wheel of Time saga might spring to mind.

The above share the fact they are long-running narratives, describing beautiful and immersive worlds, steeped in lore and character development. There is one series however, that is often overlooked, despite having multiple books frequently hit the New York Times bestseller list over the years. It doesn’t register on most radars but manages to dwarf the aforementioned in terms of longevity and scale. That series is The Horus Heresy.

The Horus Heresy foreshadows the dystopian, war-torn narrative of Warhammer 40,000, where the immortal Emperor of Mankind sits clinging to life as a mangled and broken corpse upon the Golden Throne of Terra (an archaic device powered by constant human sacrifice). Set 10,000 years before those events, the start of the series finds the Emperor at the height of his power, ushering in a golden age for mankind dubbed ‘The Great Crusade‘.

The bare bones of heresy were assembled in 1987 as little more than a short back-story to add flavour to a Games Workshop campaign setting. Many years later in 2006, the Black Library – the publishing arm of Games Workshop – decided to expand this short story into an ambitious novel series that hugely elaborated upon the original premise.

The series differs from other major franchises in that it is penned by multiple authors, each contributing their work towards the saga. That saga currently stands at 59 novels, which doesn’t include the vast amounts of original novellas, short stories, and audio dramas that supplement it. In total, these supplements push the combined total of publications well into the 200’s. Whilst this huge amount of material may sometimes feel a little daunting for new readers wanting to immerse themselves into a series, from the very first title, the atmosphere, excitement and intrigue is tangible and it doesn’t take long before the reader is swept up in the secrets, schemes and subtleties that foreshadow heresy.

It could be argued that due to its collaborative nature, the series should not be considered a contender for any longevity crown. The story and vision are linked, however, as one long narrative and tell a consistent story, rather than being individual, stand-alone pieces. Specific authors within the series have also written what could be considered candidates for any longest novel collection via Horus Heresy titles alone. Graham McNeill, a Black Library veteran and the current narrative writer for Riot Games and League of Legends has contributed 8 novels to the series. Another well-known writer, Dan Abnett of Marvel, DC and 2000AD fame has contributed 6 novels, including the first title in the opening trilogy, ‘Horus Rising’.

The longevity and lasting appeal of the series stem in part from its willingness to explore a broad spectrum of subject matter. Newcomers to the series will find that whilst set against a foreboding backdrop of war and violence, the novels manage to dip their heavily armored toes into many philosophical subjects. From science and religion to politics, social hierarchies, colonisation and familial relationships, as much thought is given to the reasons and motivations behind the conflict as there is to the conflict itself. There are explosions and blood & guts aplenty in the 31st Millennium, but these only serve to add gruesome flare to the brilliance of the storytelling and the scope of subject matter within the Horus Heresy, rather than define it.

The series often feels so addictive to read due to its masterful character development. Whilst the physical and spiritual battle between Gods, Demi-Gods, Angels, Demons and super-human Space Marines rages on, focus is also given to the human characters surrounding the conflict. From the Rembrancers – artists, journalists and orators assigned to the fleets of the Great Crusade – to the un-augmented human Imperial Army troops, page space is often dedicated to the most relatable characters in the series. As they scramble to survive and shape the conflict in any way they can, the human elements evolve beautifully throughout the narrative, their mortal threads woven into the treacherous tapestry of the Heresy, some finding influence and shaping events more than they could have bargained for.

Maintaining the soul of humanity is another common theme explored throughout the books. As the stakes in the heresy are raised and control is taken from those with less power by those with more, it becomes increasingly difficult for either side to keep sight of what they’re fighting and dying for.

The Artwork of the Horus Heresy also plays a huge part in adding to its atmosphere. In 2004, before the novel series was released, a beautiful hardback artbook called ‘The Horus Heresy Vol. I – Visions of War‘ was published. Three more similar titles would follow before they were bound together for the first time in ‘The Horus Heresy: Collected Visions’. Here, all of the elaborate and stunning Horus Heresy artwork was gathered, along with further development to the then short story that recounted the Heresy.

Similar to the way the series was written, the artwork is a shared vision split amongst many talented artists. Each artist manages to capture the grim, foreboding atmosphere of the 31st Millennium, highlighting the striking mix of fantasy and high technology that has become synonymous with the series.

The cover for each Horus Heresy novel is a work of art within itself. The panels usually depict a major character in the book or a sprawling battlefield scene, spread over the front, back and inside covers. Each piece is carefully curated to tease the events within the novel, adding excitement and intrigue whenever a new title and its cover are leaked

The Horus Heresy also differs from other narratives due to the well-known nature of its ending. With the skeleton of the story created many years before the novel series, it has always been known that in the climactic battle between Horus and the Emperor, Horus was slain with the Emperor mortally wounded and interred upon the Golden Throne. The series is written with this fact in mind so instead of attempting to change the ending or turn back the treachery of Horus, focus is directed instead towards adding twists, turns and surprises between the lines of the prescribed ending. These twists often change what experienced fans thought they knew and offer different perspectives, as well as giving new readers more to sink their teeth into and digest.

The story is quickly approaching its long-awaited climax: the final battle between Horus and the Emperor. For this to happen, Horus must lay siege to the seat of humanity, Terra itself. For this epic finale, the novels have evolved once more. Now branded ‘The Horus Heresy: Siege of Terra‘, the final books are adorned with golden spine covers and the most beautiful artwork of the series yet.

Although the series arc is about to reach its apocalyptic crescendo, the Horus Heresy will continue in the sense that it dictates and defines all of the Warhammer 40,000 literature that comes after it. Characters and the choices they make in the 31st Millennium, directly affect the most recent narrative in the year 40,000, with some key players even returning to settle old scores and adapt to a galaxy 10,000 years into the future, still crippled by the after-effects of heresy and betrayal.

In this way and thanks to the continued efforts of the Black Library and their hugely talented team of creatives, the legacy of the Horus Heresy lives on and fans will never be short of the narrative they crave.

As the series tagline goes, ‘In the grim darkness of the future, there is only war’, but the Horus Heresy has offered so much more than that premise. Despite its relative anonymity, it will always be held in the highest regard by its fans and maybe one day achieve the wider kudos it deserves, perhaps even becoming the greatest and most prolific novel series that you had once never read.